Dolphins Have Memes, Too 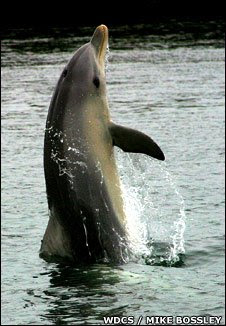 I just heard about this from the BBC: there have been sightings of dolphins off the coast of Australia who are doing what is called "tail-walking" - standing above the water by waving their tales in the water. Tail-walking is not a behavior that wild dolphins display in nature; however, one dolphin from that area did spend some time in a dolphin facility recovering from illness - and, while she wasn't trained to tail-walk, she did see other dolphins doing it. What it looks like is that she took this new behavior with her out into the wild and taught it to the others.

Observers have been trying to understand what triggers the dolphins to do this, but they haven't yet discovered anything. What the article doesn't mention, and I think is probably significant, is the deep sense of play which dolphins have always displayed. It is likely they are doing it as an interesting and fun thing to do - though of course there are more boring possible explanations, such as looking for schools of fish.

But the really interesting thing about this is that it displays what is called "cultural behavior":

"Culture can be defined as all the ways of life including arts, beliefs and institutions of a population that are passed down from generation to generation. Culture has been called "the way of life for an entire society." As such, it includes codes of manners, dress, language, religion, rituals, norms of behavior such as law and morality, and systems of belief as well as the art." [wiki]

Dolphins off the western coast of Australia have been known to teach their young to use sponges to help them gather food, so this kind of dolphin-to-dolphin teaching is not undocumented. But to do something as a group that doesn't inherently gain them better survival actually points to something deeper, a communication and a passing-on of interesting stuff which, like internet memes and social networking in humans, is a cultural phenomenon. Strange and wonderful stuff!

PS. Link:
Another interesting article from New Scientist (of course - I love that magazine!) about animals teaching each other stuff.
at 8/22/2008

Now I'm going to have the song "So Long and Thanks for All the Fish" stuck in my head all day.

This really made me smile. Dolphins are so clever. Sometimes being fun is all a meme needs to be propagated.

Uhhhh... was that the article you were trying to link to? Whilst a cycloptic feline is interesting, I'm not sure what it has to do with animals teaching each other stuff.

AAAAaaa! [clutches head] Why didn't anyone say so? Thanks so much for pointing this out; my copy and paste function has been poor since I switched to Firefox. Thinking of switching back!