The Rise and Fall of the Green Fairy 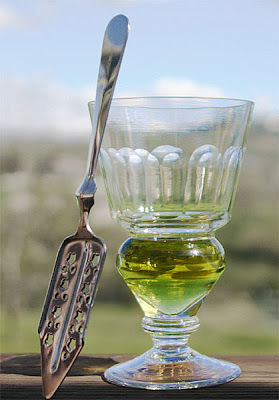 On the spur of the moment we decided to go to Switzerland for a couple of days. True, it's four hours from Bourgogne, where we are staying, to the Jura, the Swiss mountains on the edge of France, but we had recently heard about an option for sleeping in the straw at farms around the Swiss countryside, so what had been unaffordable before was suddenly within our grasp.

So what do you think of when you think Switzerland? I had all sorts of programmed preconceptions which had gone completely unquestioned: I saw Switzerland as this country full of ultra-clean people who were money-minded and held themselves apart from the world. There was also, of course, Heidi and the sort of "Hills Are Alive" views (yes, I know that movie's about Austria); the low wooden houses and the Swiss chalets; ski resorts, cuckoo clocks, cheese and snow. Oh, yeah, and the Matterhorn. And yodelling.

However, when we got there I think my daughters summed it up: "I thought it would be all cold and..." said the elder, and the younger finished her sentence "...Swiss-y." Instead we found this place with a wild variety of - well, attractive - attractions: a nationwide system of excellent bike trails; old underground mills full of wooden gear-work; a cliff-walk, where you hang on ropes and creep along above a hundred foot drop; two separate luge ("la ligne fée") and toboggan runs; a strange entertainment where they take your bike up to the top of a mountain and then let you ride down real fast (1000 foot descent in 4 minutes); and the farm we stayed at had not only animals and so on but a zip line, a trampoline and wine with the (relatively) inexpensive swiss-french farm dinner.

All right, this is sounding like a travelogue. But when we left for this trip the thing that I had forgotten was that this was the canton of Neuchatel, and the town we accidentally chose to stay near was called Travers. As in, the Val-de-Travers. As in, absinthe country. And two valleys away? Le Locle and Chaux-du-Fond: the center of clock-making country.

So here we had two days in Switzerland, with nary a yodel nor cuckoo clock nor Matterhorn in sight. Instead, we had the farmer pouring out glasses of absinthe as an aperitif (and using the fresh spring water pouring into the horse trough to water it down). A local bakery had at least eight different labels of the stuff from local micro-distillers. 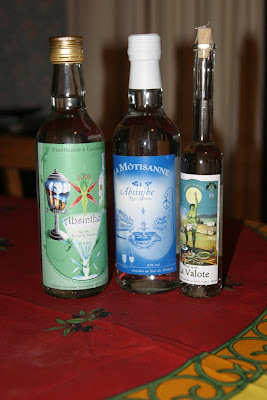 According to the label of La Motisanne, an artisan absinthe made by Roger Etienne (which by the way has the lot number written on the label by hand), "This home made elaboration is an authentic Absinth from the original region of this drink, the Val-de-Travers. Distilled to a recepy [sic] of the time of prohibition it develops a remarkable balance and an exceptional harmony of plants, which is the essence of its reputation. Ingredients: Alcohol, water, big and small Wormwood, aromatic plants."

Absinthe has, in the past twenty years or so, acquired a reputation as a fascinating drink, given its spotty history and the extreme rituality associated with its drinking. The traditional French way of drinking is to pour it into the bottom of a special fat, conical stemmed glass. Then a slotted spoon is suspended across the rim of the glass with a lump of sugar on it, and icy water is poured through sugar and spoon to sweeten the drink. Proper absinthe will louche, or go cloudy, when water is added. 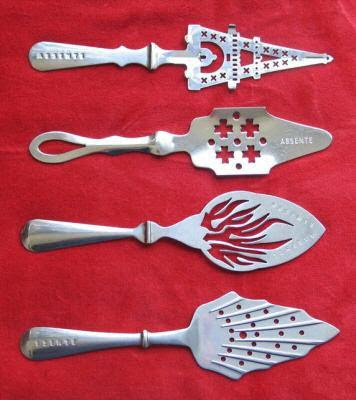 The myth of absinthe's mind-altering properties is based on the idea that a chemical in wormwood called thujone causes hallucinations and other mental instability, and even addiction. Thujone works on the GABA receptors in mammals: "Gamma-aminobutyric acid (GABA)... the chief inhibitory neurotransmitter in the mammalian central nervous system.... disrupted GABAergic signaling has been implicated in numerous and varied neurological and psychiatric pathologies including movement and anxiety disorders, epilepsy, schizophrenia, and addiction." 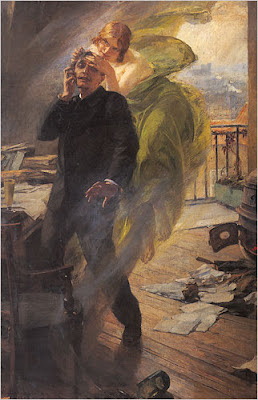 Nowadays, it is held that thujone taken in large doses doesn't do much other than cause muscle spasms - and in mouse overdose it has caused convulsions. But it seems it doesn't actually make you hallucinate. There is some speculation that much of the bad rep that absinthe had came from the fact that there were many inferior types of absinthe out there being drunk, especially, by bohemians that couldn't afford the good stuff and, like bathtub gin, it did rot their brains - but not because of the wormwood. It was more likely due the poisonous additives and colorants used, or the fact that the old stuff tended to contain 70 to 80 percent alcohol, as opposed to 40% for more standard brandies and whiskeys.

There is some evidence, however, that the herbal elements in absinthe actually have a mild speedball effect: some of them are stimulants and some are sedatives, and the resulting effect is one of heightened alertness and calmness. Wormwood is an antiparasitic, and some of the herbs also contain painkillers. So you can see why the drink was so popular in the 19th century, when the advent of the Industrial Revolution was filling the cities with soot and stink, and the average worker, without laws governing how long their work-days were, hardly had time to sleep at night. 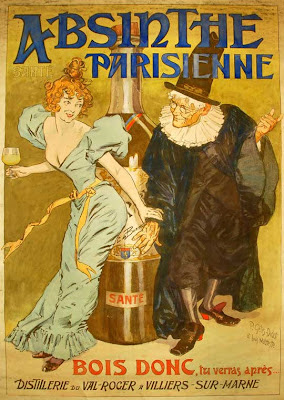 "According to legend, absinthe began as an all-purpose patent remedy created by Dr. Pierre Ordinaire, a French doctor living in Couvet, Switzerland, around 1792... [but] a certain Major Dubied acquired the formula from the Henriod sisters and in 1797, with his son Marcellin and son-in-law Henry-Louis Pernod, opened the first absinthe distillery, Dubied Père et Fils, in Couvet. In 1805 they built a second distillery in Pontarlier, France, under the new company name Maison Pernod Fils. Pernod Fils remained one of the most popular brand of absinthe up until the ban of the drink in France in 1915."

"Absinthe’s popularity grew steadily through the 1840s, when absinthe was given to French troops as a malaria treatment. When the troops returned home, they brought their taste for absinthe with them. It became so popular in bars, bistros, cafés, and cabarets that, by the 1860s, the hour of 5 p.m. was called l’heure verte (“the green hour”). Absinthe was favored by all social classes, from the wealthy bourgeoisie to poor artists and ordinary working-class people. 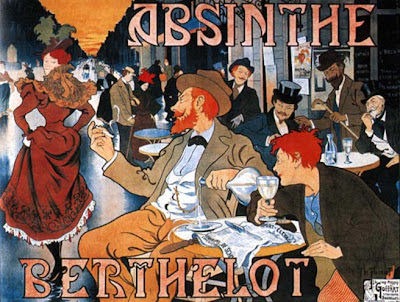 "By the 1880s, mass production had caused the price of absinthe to drop sharply. This, combined with a wine shortage [due to vine death from grape phylloxera] in France during the 1880s and 1890s, caused absinthe to become France’s drink of choice. By 1910, the French were drinking 36 million litres of absinthe per year, a quantity that was greater than their consumption of wine."[wiki]

In a curious twist, the winemaker's association, looking to the horrors of Prohibition in America, decided to take control and steer the temperance movement in France. Accordingly, they got together with the teetotalers and made the green fairy into the fall guy, working hard to publicly associate absinthe with crime, poor health and degeneracy. Various anti-absinthe people, thick in the movement, were inspired to produce scientific studies "proving" absinthe's evil properties:

"One of the first vilifications of absinthe was an 1864 experiment in which a certain Dr. Magnan exposed a guinea pig to large doses of pure wormwood vapor and another to alcohol vapors. The guinea pig exposed to wormwood experienced convulsive seizures, while the animal exposed to alcohol did not. Dr. Magnan would later blame the chemical thujone, contained in wormwood, for these effects." [wiki] 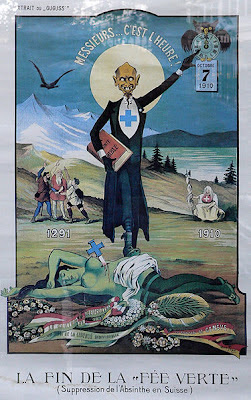 The campaign was so successful in changing the popular conception of the drink that by 1915, when the French finally banned it, it was illegal in most of Europe - and the lingering cultural effects were relatively far-reaching. The word "louche", for example, now means "Of questionable taste or morality; decadent." The roots are "French, from Old French losche, squint-eyed... from Latin luscus, blind in one eye.)" It looks from the outside like the term louche, as applied to absinthe, comes from a reference to the whitening eye of cataract, but the French dictionary carries all three meanings: squinty, dissolute, and cloudy. It would be interesting to see if one of the meanings evolved according to the media frenzy of a lost era.

Being careful and conscientious people, the Swiss make of absinthe was considered to be of the finest quality. Their product is clear, being the product of distillation, and therefore referred to as la Bleue, a term originally used for bootleg absinthe but now applied liberally to most Swiss product. The green absinthes come from a process wherein some of the herbs are then soaked in the distilled absinthe. This adds color (chlorophyll) and some additional subtleties of flavor.

I once tried to make my own absinthe by distilling it in vodka with an old still my father gave me, following a recipe I found God knows where, but it tasted awful. The exact ratio of herbs is important, and some of the herbs aren't available in the US. So now I stick to the occasional attempt at perfume manufactury, and hope it doesn't taint the still.

Absinthe has had a resurgence in legality now. Some places, such as Spain and the Czech Republic, never banned it, but also didn't seem to have the knack of making the proper distilled stuff, producing instead something called "Bohemian-Style Absinth", or just "Absinth" (without the "e"), which is inferior in flavor and apparently not too good for you. But most of the places which once produced it - and then banned it - have now repealed their laws, except for the French, who curiously don't allow liquor labeled "absinthe" to be sold in France, but do allow the same thing to be sold as long as the label says "liqueur à base de plantes d’absinth" or some such. But they do label it as absinthe when exporting it. Go figure. 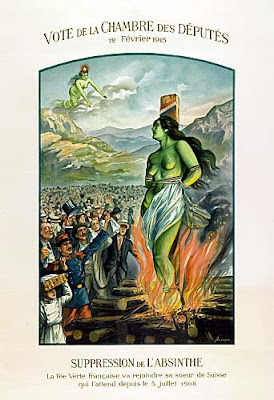 As of 2005 the people in the Val-de-Travers are able, once again, to legally produce their traditional drink. Little mountain villages like Côte-aux-Fées (in English, Fairyside), which were nothing but a collection of Swiss-style farmhouses (uh, and a small and discreet building housing the company headquarters/factory of Piaget) are now proud to show everyone they are "the Cradle of Absinthe." And my, how the Green Fairy has changed. 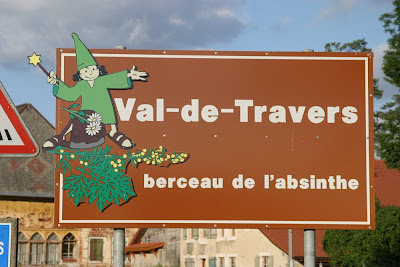 Part 2: And Clocks on the Side - coming soon.

The Virtual Absinthe Museum has lots of interesting stuff, including a good selection of period posters and drawings about absinthe which you can buy.

The last poster is splendid. Joan of Arc, crucifixion, maybe a little of Delacroix's 'Liberty'. I went to the Absinthe Museum to see who was playing the role of God the Father. ". . . up above the Swiss
Green Fairy, whose demise had already occured five years earlier, waits to welcome her sister to Fee Verte heaven."

No wonder your home brew tasted awful: wormwood is exceedingly bitter.
In Italy I have seen absinthe at 80% proof. People usually set fire to the glass before adding water to reduce the alcohol content.

This was an awesome look at absinthe. Thanks for all the information! I've been fascinated with the drink for many years...mostly because of old stories and plays. Most recently I was interested in it again after watching Moulin Rouge.

I also looked up a recipe online but haven't tried it yet. Makes me think it might be a bad idea now.;)

Sam wins a prize! I was wondering if anyone would notice the Swiss fairy in the corner. I thought it was a nice touch by the artist, putting her there.