Okay, more pictures. Been struggling tooth and nail with Blogger for two days, but finally got the pics to go up (and also fell down some stairs - the paving here is slippery limestone - so my right arm isn't working too well at the moment). But here we go! 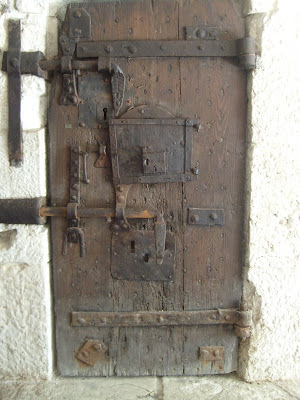 This is my favorite picture - for the actual beauty of the photo, but also, look at those locks! I have some other pictures of wonderful locks from Dubrovnik which I will post soon that are beautiful and beat this out in complexity...These prison photos are from the prison that the Bridge of Sighs leads to, from the Doge's Palace. It's part of the admission to the Palace to see the prison. 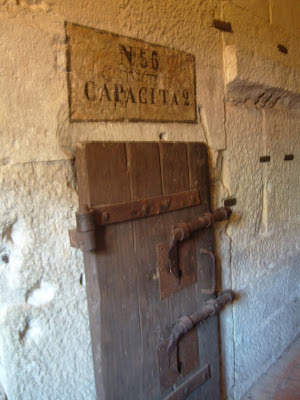 Strange to me that they would label the cells and then put the capacity on the label. I can't decide if this was for later tourists or not. It looks almost like a street sign. 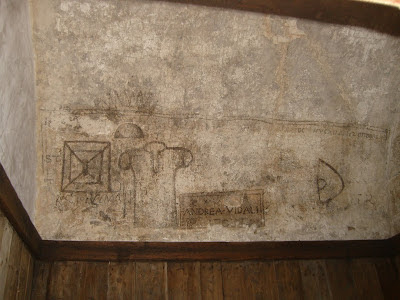 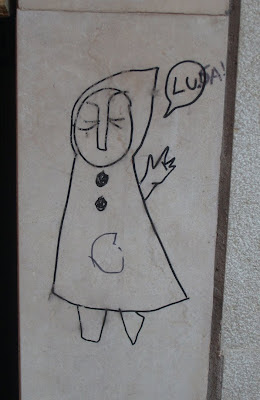 Non-prisoner's graffiti. I always photograph silly graffiti, ever since I lived in London and never got a picture of the best graffiti ever: on Mare Street in Hackney. It said, "Treacle People: sticky like us" and had these little melty marshmallow creatures. Sigh. I'm sure it's gone now, but it really got stuck in my head. ...What do you think this one used to say before someone added onto it? 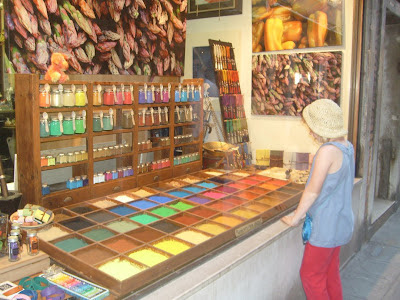 The best art store display I have ever seen. It made me want to eat it. 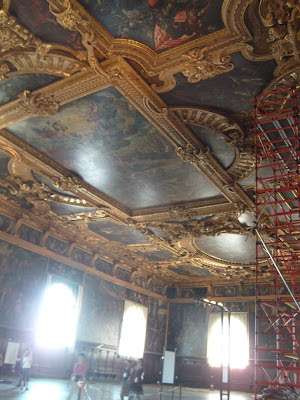 Inside the Great Council room of the Doge's Palace. The room is something like 25 meters long, with a fully carved-and-gold-leafed ceiling over the whole thing. Another illegal photograph. 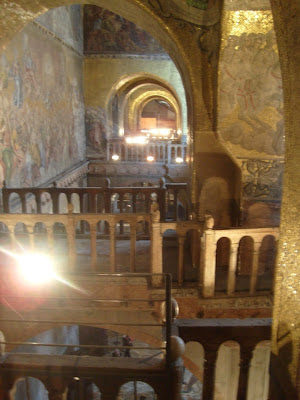 There are these little walkways that go all around the upper levels of San Marco, less than a meter wide, with stone balustrades on both sides. It's a common Gothic thing, little high-up walkways (see the Hunchback of Notre Dame), but I was struck by these particular ones for being so intensely circuitous and narrow (and because it's rare to be allowed above them, so I really saw them from a new angle). I wish I could have gone walking on them; they went all the way around the inside of the place. They remind me of dreams I have had, of tall and tottering walkways... 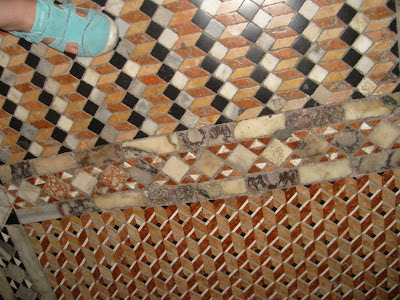 The floors of San Marco are a dazzling display of pure Byzantine geometry. Such an amazing place. 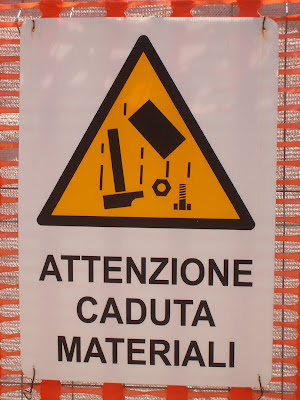 As far as I can tell, this actually says "Beware of Falling Stuff."

The baby in the picture is probably the Christ child at his circumcision. The wrappings are his swaddling bands -- they really did wrap the kids up tight with those things.

Now that I think of it, though, this is more likely the churching of Mary, when she hands Jesus over to Simeon in the temple.

Thank you for posting interesting photos.

Mmmm... LOCKS!
:)
I love locks. And door handles as well. I saw a few nice ones in Prague last week and the workmanship never cease to amaze me.

"They remind me of dreams I have had, of tall and tottering walkways..."

My whole life I have had dreams of my grandparents home having levels and staircase's that did not exist. Then I began to have dreams where there were long and spindly, shaky at best, almost Escher-esque staircases ascending to high rooms teetering above the original home.