I just came back from a short trip to Venice, which isn't far from Split (but not easy to get to, for some reason). So, below are some pictures of things n' stuff that I found while I was there. My apologies for the quality of some of these, as they were often taken through shop windows or without flash in places where photography was not allowed. Lots of pics, but not too much writing, so I hope you enjoy the (somewhat blurry) eye-candy (Blogger is not accepting any more pictures, so this will be part 1). 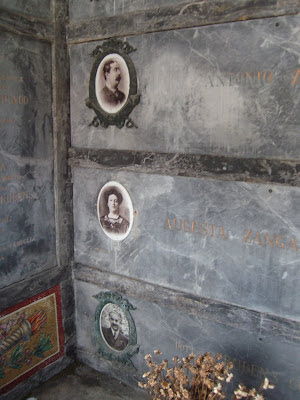 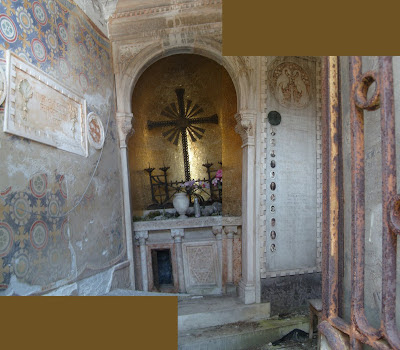 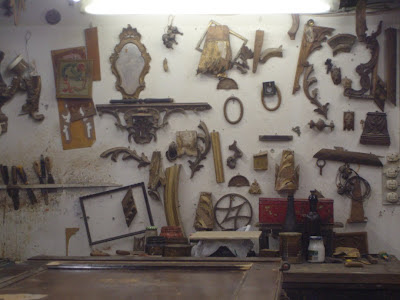 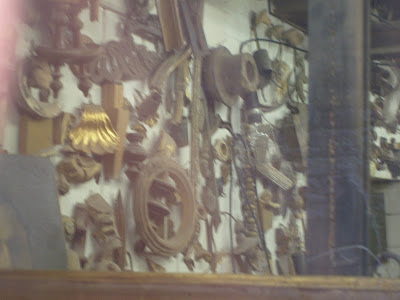 The inside of a store where one gets one's pictures framed. The variety and wonderfulness of these bits is perhaps a perfectly conscious thing, but the workmanlike atmosphere of the shop was real. 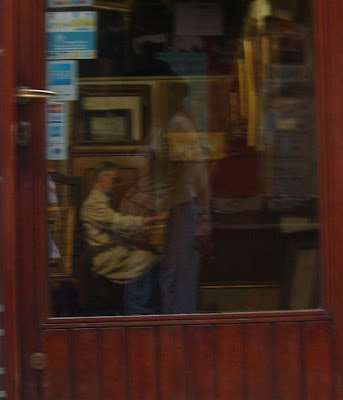 My daughter and I walked past this man probably a dozen times and were never able to get a good picture of him. We couldn't believe how like a waxwork he looked: thin and weirdly out of date with his white coat on, talking on an old-fashioned telephone, with a corpselike pallor. We speculated that he was actually an automata who was put there for atmosphere, and then decided he was too creepy to be art. 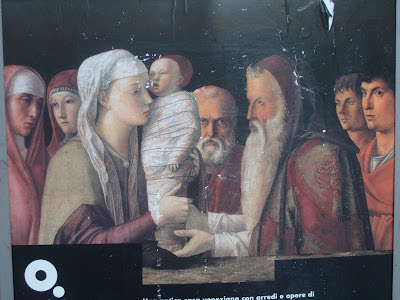 These were on a bunch of the trash cans. I could never figure out if it was for a particular show or what. It seemed to be for a place that called itself "O" but the words below were so impenetrable that it was impossible to tell. I found the image captivating, though. What is happening in this picture? Why is the baby all wrapped up? Is it dead, and in a shroud? Then why does it look so alert? And who is the man who is handing the baby to its mother? Or is she handing it to him, reluctantly?? 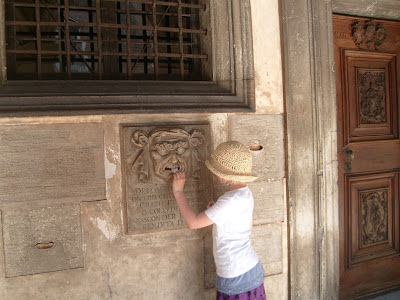 This is a Bocca di Leone, a Lion's Mouth, where people used to be able to put messages denouncing someone for treason. A very Venetian idea, somehow. They are everywhere at the Doge's Palace, as if they expected denunciations at any moment; or perhaps there were different ones for different kinds of denunciations. However, this was the only one we found that wasn't completely defaced - erased, even (see the ones on either side). Why this is so, I don't know. I speculate that either Napoleon had them removed, or the message below was embarrassing at some point and so was removed (for example, if it said, "Denounce witches here," or something). Either way, it's an unfortunate loss. You can read more about them here (great blog about Venice). 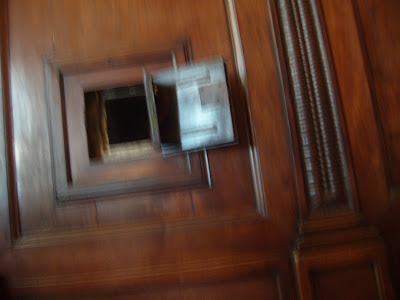 Here is the back of the Bocca, taken, of course, when I wasn't supposed to use a camera. Thus the odd angle and blurriness. But please note the double door and the serious lock. They took these things seriously, and had a complex way of dealing with complaints, either about other people or about the government. 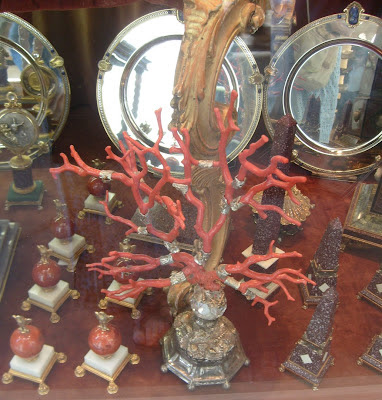 Plus ça change, plus c'est la meme chose... Treasures are indeed alive and well in Venice. 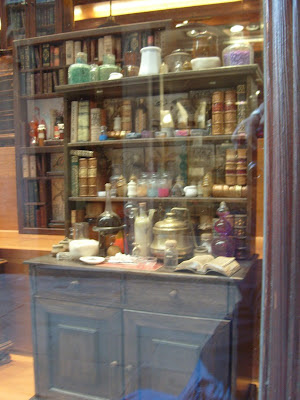 This is a little, old-fashioned doctor's cupboard - a miniature, about 16 inches high - with all the chemistry bits and the cool jars full of weird stuff. Total Cabinet of Wonders. I took about 6 pictures and this was the best one.

- More on the The Most Serene Republic of Venice, who ran our part of Croatia for hundreds of years. Interesting reading...
at 5/19/2008

Heather, your blog is such interesting reading.I believe that's the Virgin Mary handing out her baby to a rabi for circumcision. So I guess reluctantly is a good description.

Hi! this is the Presentation (of Jesus) at the Temple by Giovanni Bellini, one of his earlier works - more info here.

Oh yes - also, the baby is wrapped up because that's how babies were handled in those days - swaddling bands.
The Presentation, like the Circumcision, is a ritual for new babies in the Jewish faith and often depicted in Renaissance art as part of Jesus' childhood. the Circumcision, for example, was taken to be a foreshadowing of his spilling blood for mankind, and so you might find it as a secondary subject on the predella of a Crucifixion altarpiece.
I agree with you about Venice - I've been twice and I can't wait to go again.

Nice to see some less touristy images of Venice. That little cabinet is lovely!

I think the scene in that painting may be the infant Samuel being presented at the temple. His mother was childless and promised that if she could conceive the baby would be given to the temple as a priest (rather defeating the object of having a baby in the first place, I would have thought)

I'm not up on art, but my guess is that the infant is swaddled--wrapped in swaddling bands. No clue on the rest of it, though.

On "What is happening in this picture?" I would guess it's a Presentation at the Temple (a.k.a., the Circumcision). The baby is swaddled to keep his bones from growing crooked, or to keep him calm by reminding him of his last home, the uterus. I think the baby may have inherited his pallor from his mother. If this is the New Testament circumcision instead of a generic one, the man would be Simeon and he would be taking the baby from its mother's arms. I think she looks rather reluctant, too. But if it's a standard bris, she knows what going to happen and that could be why she doesn't really want to hand the baby over.

Thank you, one and all, for all the informative comments! I actually knew about swaddling bands but had never actually seen any, so this just looked weird to me. It still seems like a lot more bother than a swaddling blanket, but...

If anyone has any ideas about the Bocce dei Lioni's defacement, please write in.

The circumcision and the churching of Mary would have occurred on the same day -- the eighth after the birth.

Hi - just a quick comment. You wrote: "La plus ça change, la plus c'est la meme chose." I'll assume you got an automatic translator to write the French. "La" would be the direct translation of "The", but in French, the syntax is different and the "La" would not be used. The correct expression is: "Plus ça change, plus c'est pareil." "Pareil" is very close in meaning to "la même chose", but the rythm of the phrase is much better with the former word.

Trust me on this, I am francophone (from Montreal).

Thanks, though, for making me go check sources - the one I used I usually trust on most things, so I didn't double check -- mais voila! It was wrong. That'll teach me.