A Line Drawn in the Sand 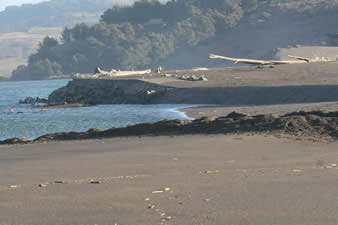 Snapshot: a poor-student January weekend trip with a boyfriend to the Wine Country in Napa and Sonoma Valleys, to do some wine-tasting and try a hot spring (maybe) and just explore. Unfortunately, the wineries were largely closed and the spas were too expensive, and it rained and rained, for three days. There were flood warnings. We fell back on driving, following the Russian River out to the coast and then, eventually, on up to Mendocino. We were aimless, something I miss nowadays.

I was feeling unadventurous with the rain, so when we pulled off the road at the place where the Russian River came out to join the sea, looking out the car window at the grey day and the beach far below, I was uninclined to be friendly towards my partner when he went off down a cliff-trail to the beach below. I stood, fuming, for a little while, and then followed him down with ill-grace.

On the beach, the sounds of the sea calmed me a bit. The air was cold and fresh, and there were small birds running about. The river had formed a blind estuary:

"... “pocket” lagoons... frequently occur at the seaward end of a stream, which has a small drainage basin and thus limited amount of runoff. Where the rainfall is seasonal, the inlet of such a lagoon is open during the rainy season and is closed by wave action and long-shore drift during the dry season. Under natural conditions these lagoons have significant water exchange with the open ocean by seepage through the porous sandy barrier" [link]

The water stood, a great lake of it, bulging beyond a high sand-dune. Odd little heads peeped themselves over the edge of the dune, curious and shy, looking longingly at the sea, where another head poked out of the water: seals, trying to decide whether to make the trek over the dune to the safety of the sea.

I did what I often do at the beach, idly drawing in the sand with my heel. My friend had gone off to see if there was enough driftwood to build a little house, and looked as if he were having little success. I looked at the sand where I was scratching, and noticed something: a slow trickling of water, continuous and steady, coming out of the sand. The river, higher than the beach, was seeping through the immense sand-bank into the sea.

I walked to the top of the dune, eyeing it critically. It seemed to me that the water in the estuary was not far below the top of the dune. I decided to play around and let some trickle of the water out so that my friend and I could make dams and channels, which he was very fond of. So I dragged my heel from the water's edge over the sand-bar to the beach, making a thin scritch of a line. No way was this going to get any water. It was too far, too deep. Still, it was something to do, and sometimes I get funny about things like this. I wanted to try, anyway.

I went back and drew my heel over the line again, and again, and after four times the water's edge seemed to follow my foot a little. One last drag, and the trickle began. I had broken through!

My partner, interested in what I was doing, came over and began to help me form and shape the channel. We drew bits off to the side, made dams, played pooh sticks. Unlike most beach waterworks, the water didn't sink into the sand, but went where we bade it, forming rivulets and pools and filling dams in a most satisfactory way.

By this time the little stream had spread to be about a meter across, and a number of other people out on the beach had come over to help, digging things deeper and making better channels and dams. We had a great string of little ponds which the water leapt and bustled willingly through. Children sailed sticks down it; adult men dug furiously with sticks and hands. Everyone was sandy and wet; people shouted to one another to accomplish tasks; we all worked together to make it bigger, better, more amazing.

There came a moment when we all looked up and realized, however, that the water was now five or six meters across, and almost a meter deep in some places - and we realized that if we were to be where our cars were we would have to cross now or walk several miles back to the closest bridge. Fathers picked their kids up and hurried across the thick currents; women picked up bags and shoes and ran, splashing. We stood on opposite banks and waved at each other or stared upstream, awed.

Somehow, we were unable to leave: it was as if there was something that had not happened yet. The water grew deeper and more swift, and it became gradually clear that there was a fallen tree trunk straining above us at the sand-bank; it stirred and pushed, the water rilling around it, and we stood back, silent now, waiting, while the water pushed above and ate away below. It seemed impossible, looking at the raging torrent, deeper than a man's height now, that it had been caused by me dragging my heel across the sand.

The people on the far bank were smaller now, a good eight or ten meters away: a long "ahh" went up above the roar of the water, and the tree, moving slowly at first, began to slide along toward the sea. First it snagged, turning and rolling, and then something let go - and the tree began a stately course downstream, the brown water leaping and tugging at it. By the middle of the beach it was moving like a freight train, unstoppable, and leapt when it hit the salt water in a great arc: then, bobbing and whirling it went on, past the breaking waves and into the vast grey-blueness of the sea.

A year after this story, the Sonoma County Water Agency began breaching the Russian River estuary whenever it looks as if it might be causing problems upstream. However, they seem to take much more drastic measures:

"The size of the pilot channel varies depending on the height of the sandbar to be breached, the tide level, and the water surface level in the Estuary. A typical channel would be approximately 30 m long, 8 m wide, and 2 m deep (100 feet long, 25 feet wide, and 6 feet deep). The amount of sand moved can range from less than 100 cubic yards to approximately 1,000 cubic yards. The Agency contacts State Parks lifeguards within 24 hours prior to breaching activities to minimize potential hazards to beach visitors. Signs and barriers are also posted for 24 hours prior to and after breaching events to warn beach visitors of the hazards of the breaching area." 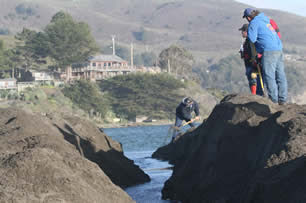 To be honest I wasn't going to read that based on the humble picture. Then I skimmed it and you had me hooked into reading all of it. Nicely written and what cool story :)