Inside, Outside, Upside Down (And Inside Out) 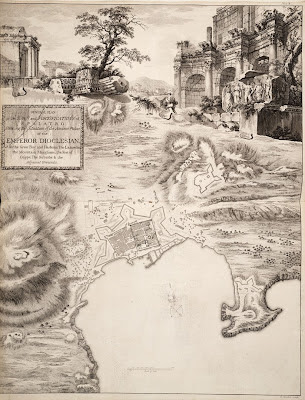 I'm thrilled to have discovered the Ruins of the palace of the Emperor Diocletian at Spalatro in Dalmatia by Robert Adam, a Scottish neoclassical architect who is "considered by many to be the greatest architect of the late 18th century" [wiki]. Spalatro, in this case, being a Scottish architect's spelling of Spalato, the Italian (and more importantly, Venetian) name for Split. 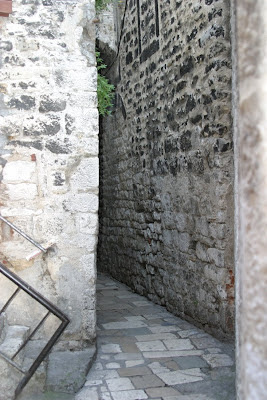 I've been slowly becoming obsessed with this city. I wander the streets when I have time, trying to figure it out, making sketches and peering through archways. It's not just that the city is old, that the streets are crooked and narrow (sometimes extraordinarily narrow) and the buildings are an interesting hodgepodge of eras and styles; it's not even that every part of the Old Town is full of Roman bits, arching over streets and providing structure for other, less well-planned building efforts. It's really more about a strange Escher-esque quality. The city feels as if, sometime in the past, parts of its stony, unforgiving insides have been turned inside out. 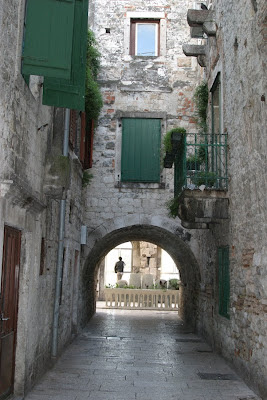 Disembodied arches sprout from the sides of walls, going nowhere; ancient stoneworks stride through shiny boutiques, contemptuous of their surroundings. In some places, ancient corridors have shed their roofs and become alleyways, complete with balconies and shutters - and turning, without warning, into corridors again, which lead unceremoniously into rooms whose arched Roman windows look out over the waterfront: rooms without roofs, patios with glass windows. 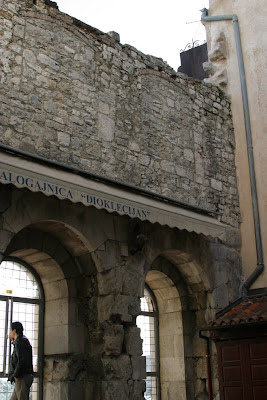 My favorite alleyway dead-ends in a half dome which springs from the walls of two houses, covering the end of the little street with its lost interior. Who knows what living-space the dome used to cover? And below it, a lovely Venetian window, complete with stone tracery, which used to look out on some view of the Temple of Aesculapius, perhaps; but now it is filled in by a modern window-frame which looks through the same window in the opposite direction, out into the alleyway which, perhaps, used to be a corridor. 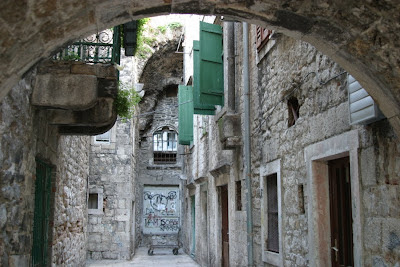 I marvel at this ability of a town to twist itself around, passing through the eye of a tracery and back again. It seems to me different than any other place I've been, and yet I keep remembering cities - York, Jerusalem, Istanbul - full of the layerings of past and present. They, too, have the richly overembellished rooflines; they, too, have achieved a fanciful arrangement of spaces possible only through centuries of adding structure onto structure onto ruin.

But Split defies them, somehow. There is something about the core of this town which is different from the organic growth-patterns of other ancient cities, and I think I may have finally put my finger on what it is. It stems from the origin of the city as a 9-acre Roman palace, planned and executed with typical Roman efficiency, strength and symmetry. 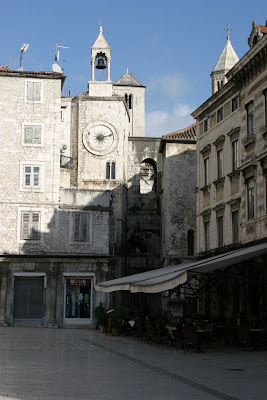 Only part of the massive Iron Gate peeks out at you from behind a Venetian palace. The rest of the buildings came later still.

It is these, the strong 1700 year old bones built by tidy minds, which poke resolutely through the 300 odd years of high Venetian dash and dazzle, 10 years of Napoleonic facelifting, and 100 years of Austrian absentee-landlording. As you walk, you encounter a mobius strip of sorts, as the city flips around you - but then there they are, those tenacious bones, marking that single few years in history when a Roman emperor built a special place for himself to retire to.

Diocletian, the emperor who retired to this singular palace, was an extraordinary man, lowborn and local (from near Solano, just around the corner of the bay), who rose through the ranks of the Roman legions to be declared Emperor on a hilltop near Antioch. He co-ruled for twenty years (284-305) with his friend and fellow-officer Maximian, securing previously unsecurable borders and restructuring the governing system so that what was a crumbling Empire lasted another hundred years. In 305, after a prolonged illness, he became the first Roman emperor to voluntarily abdicate from his position - and moved to his palace to live out the next seven years, gardening and looking out over the sea. He was said to be proud of the cabbages he had planted with his own hands. 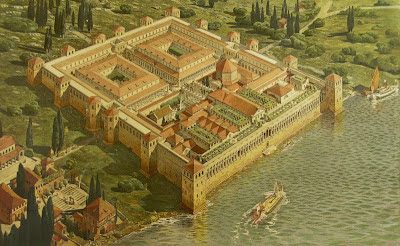 (By the way, I recommend the Wikipedia article on Diocletian. Sometimes Wikipedia can be a bit dry, but Diocletian's inimitable personality seems to simply pop through the listing of battles, conflict, and death, much as the bones of his palace continue to pop through the modern walls of everyday Split. The Roman ruling class always reads like a cheesy soap-opera, with people poisoning people and other people sleeping with their sisters; but Diocletian comes across as a really smart, straightforward idealist with plenty of discipline who was... well, charismatic).

So now I'm letting all this stuff run around inside my head, in the hopes that some interesting fiction will come out of it. I leave the back of my head open as I go about the business of living, and hope the spores come and settle - and grow. Is that enough mixing of metaphors? Mushrooms with legs come to mind.

But back to the wonderous book by the blessed Robert Adam: the man came during the Venetian reign, at a time when those lovely bones were still very much out in the open, and - thank you, thank you! - the man did engravings of familiar places all around the city. Not only that, but he did sectionals of the Palace as it must have been, comparison drawings of the ruins all around him and what they must have looked like originally, and a complete floor-plan of the Palace as it was in his own time and as it likely was when it was brand-new (based, in part, on his own studies in Rome, where he read all the ancient architectural writers such as Vitruvius and Pliny the Younger). 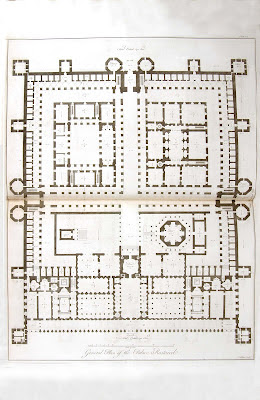 Included - get this! -is also a comprehensive description of the uses of all the spaces within the original palace.

Check it out at the Digital Library for the Decorative Arts and Material Culture, a resource I won't be forgetting soon.

So, in the interests of capturing a bit of the fascination, I've included a few of his fabulously Picturesque plates below, with my own pictures of the same angle and the same spot. Okay, this turned out to be harder than I thought, so I'm saving it for a whole 'nother blog post, probably in the next day or two, so hang with me, please. Cheers! 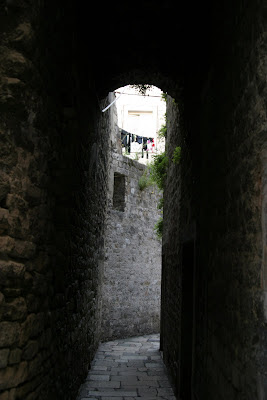