Counting Your Way to Safety When I was a child I used to eat M&Ms in a particular way.

For plain M&Ms, I separated them into colors and then ate them in pairs, one on each side of my mouth. If the number of M&M's of any particular color was not even, then I was presented with a problem. I could divide the offender in half, and eat it that way, or I could save all the "orphans" and eat them in a great handful, succumbing to greediness and a curiously thrilling sense of chaos - as if I was letting go, dipping into a terrifying vortex for a few moments while savoring the veritable explosion of chocolate on my tongue.

Peanut M&Ms were devoured in a different way. First, the candy was sucked off, and the chocolate bitten in half; these halves were sent to separate sides of my mouth to be chewed up. Then the peanut was broken into its two halves (but the little sprout inside taken out) and tucked into my cheek while skin and sprout were chewed and swallowed. Lastly, the peanut.

It would often take me more than an hour to fully savor a regular-sized bag of M&Ms.

I find, now, that this idea of "coming out even" is considered a prime obsessive-compulsive trait. The number of steps from point A to point B; bites of food; pages in a book; and so on, all are carefully counted and the end result made to "come out even", even if it means taking an extra, smaller step at the end to accomplish this. The sufferer is compelled to order their world in this way, to "right" the anomalous odds (so to speak), to keep track of numbers, consciously or subconsciously. The compulsion is just that, an involuntary urge which has nothing to do with choice: a deep, sometimes desperate need to order the universe, usually as an anxiety reaction, which sometimes comes to rule the person's life.

Nothing to do with Obsessive-Compulsive Disorder, but strangely compelling. Thanks to Lost Circuits

For me, it lacked this overriding element. In my case, it was more an asthetic thing, a combination of natural fastidiousness and a deep belief in the magic of symmetry. It was a game I played with myself, an ongoing artwork, a way of setting things in order, creating beauty with my mouth and mind. A meditation of sorts.

Which is, I think, less unusual than we adults probably think. My elder daughter, for example, is constantly creating things which, in an adult, would be considered conceptual art pieces: drawing around shadows on the driveway with chalk and then going back five minutes later with a different colored chalk and doing it again - and again; making a "drawing" of a bumpy road near our house by letting the bumps move her pencil over the paper - for the full six-mile stretch, resulting in an extraordinary drawing of motion and time. 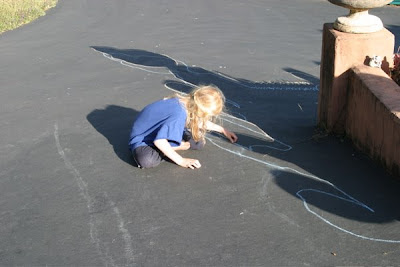 These kinds of activities, this kind of art-making and rule-making, are absolutely everyday things for children. Step on a crack, break your mother's back; step on a line, break your father's spine. Cross your heart, hope to die, stick a needle in your eye. Gruesome, some of them, but based on a well-ordered (if not entirely fact-driven) universe designed specifically to keep dishonesty, monsters, and general chaos at bay. Anyone who has read Tom Sawyer or Huckleberry Finn will know that the minds of children hold the seeds of whole cultures of superstition and ritual.

Which leads me to think: perhaps this is really just a universal trait, this desire to order the universe, to create something out of nothing. Those who are educated do it through "acceptable" channels, such as science or research; those who are ignorant - children and the uneducated - do it anyway, through ritual and superstition. We all use what tools we have to hand. Which may, to some extent, explain why it is so hard to change people's view of their world.

Growing up alone in my large, dark house, I made up my own rules for how the Dark side worked. There was no question of denying the ghosts who changed the water temperature of the bath, or the Thing that lived under the bed: it was more a matter of organizing them enough to keep them at bay. So eventually, for example, the Thing was no longer able to grab my ankles if there was anything covering my legs.

At first this meant "if my legs are completely covered"; but in the naturally bureaucratic mind of a child (me), this definition was continually analyzed, questioned, and redefined (in much the same way the early Catholic church was constantly defining itself via debate and endlessly nuanced theological distinctions), until I was safe if anything "touched" my legs. Further questions came up, such as "Are buttocks considered part of the legs?" And eventually the committee in my head decided these things (it was in favor of the buttocks), and I was able to, for example, keep the Thing at bay through the simple expedience of underwear.

And of course, eventually this led to the vanquishing of the Thing by virtue of its defanging - as all dull, rule-oriented bureaucracy will do with wild beasts and interesting dangers, in the end.

The Exception That Proves the Rule: Calvin, questioner and rule-breaker (and creator of the fabulous game Calvinball) was funny precisely because the Calvin Systems and the Adult Systems did not intersect well.

It's certain, however, if you give children any chance at all to create their own taxonomy for the universe, they will do so. For in definition lies security, and so ignorance will make its own rules, self-creating the world: to make rules is to make known the unknown, to fend off the arbitrariness of the Universe.

The obsessive-compulsive disorder's version of this, the need to count, to tidy, wash one's hands until they bleed because by doing something a certain number of times in a certain way you can define it - I think this is merely an extreme extension of our need to overcome the arbitrary. Children often go through an obsessive-compulsive stage, becoming a victim of their own natural ordering process. When the need does not recede with childhood, when it goes on to dominate one's life, interfering with relationships and causing self-damage - at this point, the "disorder" concept begins to come into play. When you find yourself unable to stop coming up with new rituals, or afraid that you are going crazy, or simply unable to get to work within an hour of the normal start time because you have to go back and do something again, and again, until it is right, because that is the only way to find peace - then you are suffering. This is a different thing entirely.

But in regular life, as Frances' friend Albert demonstrates in Bread and Jam for Frances, it's nice when your lunch can come out even. A little bite of this, a little bite of that, some soup, some salted egg: eating, and other things, can be a nicer experience when you put a little thought and structure into it, when it blends perfectly. Mindfulness is not a bad thing, and making up rules to make one's life more interesting can be a good thing. Eating your apple and raisin tart in small bites, and dividing each raisin in half to get at the sweet bit as you go, can be a way to help bring yourself into the present, to pay attention. It means you are tasting, exploring, nodding to each part of what you're eating. Going through life like this can mean you are not gulping down experiences, not rushing yourself, but making a way to see things, feel things, notice things.

But beyond mindfulness, I believe a studied superstition is more interesting than a fully-modernized lifestyle, free of ritual and meaning. To throw salt over my shoulder or knock on wood, though my forebrain knows it does not affect the universe, still makes me feel a sense of connection to an older magic. I like to encourage my children to find creative solutions to their fears. I still believe in the power of twelve inches, twelve hours, twelve pieces: I prefer it to metric in many cases. And I still enjoy the slow ritual of dissecting my peanut M&Ms.
at 4/03/2008

Would love to see some of your daughter's creations. Have you photographed and uploaded them anywhere?

thank you for this entry. it brings to mind the western beauty standard of bilateral symmetry.

A fascinating post. I really think you may have uncovered some interesting truths.

As a child, I had some of the same inclinations as you describe. While I still sometimes sense the same urges to organize as you described, I am not compelled to follow through with them as I once was. But some of that irrationality remains, dormant but not undetectable.

Your last paragraph makes me wonder, too, if American's general rejection of the metric system is based in some of the meta-mythology you describe. We reluctantly accept it's base 10 conventions for the sake of scientific study and application, but we adamantly resist it's everyday usage. I would think that even American scientists would rarely speak of driving in kilometers or cooking ingredients in grams or milliliters.

I think your daughter's artwork sounds brilliantly creative, too. I like it's direct simplicity and transient qualities.

I love this post.
This is exactly how I approach my tendencies to count, measure and divide things.

Every time I see M&Ms mentioned, I remember 'Survival of the Fittest'. It still cracks me up.