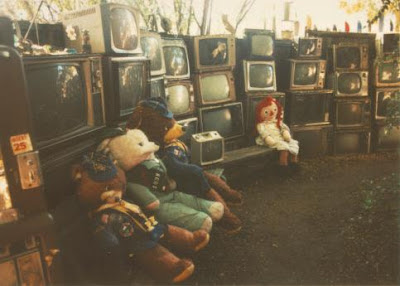 Years ago, my college friends and I used to take trips up to Mill Valley to visit the Unknown Museum, an amazing collection of stuff arranged in a house which looked, from the outside, like a typical Mill Valley home...except there was a bunch of stuff in the yard. Stuff like stacked TVs, bowling balls, and baby dolls transformed the outdoor space, so that walking by, you had a peep of something amazing.

Going inside on one of the few days it was open was overwhelming to the eye: an aquarium full of Mr. Potato Heads, stacks and stacks of old lunch boxes, rooms and rooms of toys, dolls, plastic bits; mannequins and glitter-balls and every kind of thing from fake food to electronic parts. Nothing seemed to be single. It all came in multiples, sometimes in the hundreds: this Museum was a Wunderkammer of post-consumer detritus. Things were not only displayed in tanks, towers, and piles but in fascinating tableaus where mannequins sat down with TV dinner trays full of vacuum tubes, or a bride-mannequin crawled across a landscape of tiny bridal figures who seem to be tying her down, Gulliver-style.

The Unknown Museum, as it was called, lived in an old radiator shop in Mill Valley from 1974 to 1985; its founder, Mickey McGowan, believes in having lots of stuff. "I always thought that if your mom threw it away, the Unknown Museum was the place to come. Once I tried to create a sort of Zen space there, a room that was spare and austere, but when I'd go in there I'd go nuts wondering what I should put in. Gor me the perfect Zen space is jammed with all kinds of stuff. Zen is all one, isn't it? Well this is all one, the purity of allness." (thanks to Image Magazine for the quote).

After twelve years, the Museum lost its lease, and Mr. McGowan moved the whole museum to the residential neighborhood that I remembered visiting, a place he felt was perfect for the Museum, having a sort of Beaver Cleaver/Ozzie Nelson flavor to it. The different rooms of the house became theme rooms: a boy's room "crammed with chemistry sets, sports equipment, war toys and insect collections; the girl's room had stacks of Nancy Drew mysteries, worn ballet shoes, jump ropes, wedding dress dolls and Katy Keene comics..." 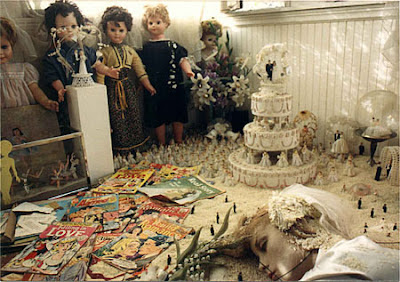 Trapped on the way to the wedding, while everyone watches in anticipation: the landscape around the Bride is made of heaps of rice

Yet the art of the place was not simply in its sheer collecting madness, but in the way that McGowan placed everything. Nothing was overlooked. He used volumes of stuff as a kind of space-painting, creating awesome displays that overwhelmed with their numbers - but he also paid attention to theme and worked asthetically to arrange things so that they had humor and looked...well, artistic. It's rare for someone with Mr. McGowan's bent to really put so much thought and artistry into their collection of stuff, really treat it as a Wunderkammer - in how it is arranged, how it is displayed. The whole art of crafting a proper Cabinet is to be found, not only in the asthetic presentation of things, but in the personal quality of the taxonomy. So often people who love collecting tend to file their stuff away in boxes, or stack them up like Scrooge McDuck all around their room or in some kind of storage, following some external taxonomy of value or meaning; but to put it all together, to present it in a personal, whimsical, commentative style, so that people can gasp and wonder at the sheer awe of it, is really something.

And to do so with objects that most of us do not admire or feel have value is especially impressive. I would not, if you told me of this place, think that it sounded very inspiring; but the care and order of it, the gimcrack-ish depths of our own associations with what some would call junk, makes us pause, makes us wonder.

Which is the point, isn't it? Plus, making it funny is always a bonus.

The Mill Valley house was a great place, with a wonderful garden, but eventually Mr. McGowan had to move again. He put most of his stuff in storage and moved into a railway car (still decorated, of course) in Mill Valley for awhile. When I talked to him recently, he was living in a house at an undisclosed location in Marin, which he said was done up much the same as before but which he no longer opened to the public. It's a shame, because it was truly a service for people, saying to us: "Here is your unwanted, your discarded: it is your past, your childhood - and see how it can be made wonderous?"

Which is something everyone in modern consumer society needs to hear. And see.
at 12/16/2007

have you ever been here/heard of this?

Ooooh, yes. I love that place, and hope sometime to do a post on it. We studied the man who created it when I was in art school, and I've been there twice. I even have some "tell the bees" dishware to prove it!

Have you been there? I recommend it.

And by the way, let me say thanks for the reminder. It was always my plan but I'd forgotten about it. I wondered when someone would get around to mentioning it...

Nope, haven't been there. Midwestern gal who's never been west of Denver. Someday, though.. it sounds amazing.

Had my 20th b-day party there- it was the best!

MJT is really almost the only thing that give LA a reason for being (The Institute for Figuring is another -- as are Watts Towers, of course!).

It is also one of the truly great art works of the 20th century. Any USA-ian who hasn't seen it is missing out on one of the redeeming moments of their culture -- and it makes the States worth visiting for the rest of us.

I'm a total fangirl, obviously... but it's near impossible to not be seduced by its blend of fiction masquerading as fact and reality that is stranger than anything that could be imagined. And it has a recreation of many of the most compelling inventions of Athanius Kircher... completely mesmerising.