Places That Are Lost 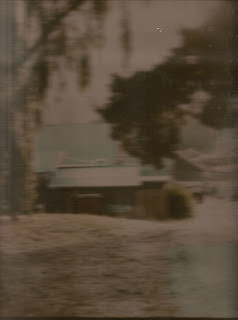 Yesterday I took a hike with my family to a waterfall that exists near where I live. Throughout my life, this place has been one of my most sacred places; even as a six- or seven-year-old I used to simply sit and admire it and the cool green pool at its base. I imagined fairies living in the mossy grottos of its rocky cliff; I saw a whole underwater world in the moving depths of the pool, where crayfish roamed under the shadows of the great rocks, and the sandy patches twinkled with fools' gold. The water fell with a sort of awesome finality down a hundred feet or so, and we would crane our necks looking at it and the trees clinging to the canyon all around.

Yesterday was the first time I had been there in nearly twenty years. There's been a flood since then, which pushed some of the great logs and large rocks around. The waterfall has worn deeper into its niche, and the shape of it has changed ever so slightly. But it's still the same canyon, the same deep pool (crayfish and fools' gold intact), the same sound and feel. The sun still slants through the trees and lights up the depths with magical fingers. It is, simply and finally, as sacred as it ever was.

There was an unnamed and unexpected comfort I gained by my visit, though, which had nothing to do with sacredness. On reflection, I think it had to do with the fact that, of all the meaningful places that existed for me in childhood, this is one of the few that still exists. There are so many, many places I have loved and lived with that are simply gone, torn down or washed away or unfindable. The barn, for example, on the ranch where I grew up: the floor and walls full of holes that we could climb in and out of; creeping around in the open space underneath its great structure; the owl pellets strewn on the floor with tiny mouse-bones and skulls in them; the wide, hand-sawn boards; the things that were stored inside.

This barn was at least a hundred feet long and thirty feet wide down the middle (not including hip roofs). It was built on two-foot-square redwood beams, sided with eighteen-inch-wide planks. It was amazing. But when the roof blew off in a freak windstorm, our landlords decided they couldn't afford to fix it. They took the whole thing down. Poof: no barn. As we used to say when my children were young (with hands held out helplessly), "All gone!"

Sometimes I wonder if I simply made up my childhood. No one seems able to corroborate it completely. There are a few photos of the barn, though.

Curiously, as these things always happen, I was already thinking about something similar before the waterfall. I had been reading BLDGBLOG, which I sometimes do, and he had a post about Gunkanjima Island, a coal-mining island off the coast of Japan that was essentially built on its own slag heap. The island had a whole town on it, of workers and their families, complete with shops and bath-houses; and the photos, taken by Japanese artist Saiga Yuji, are simply unbelievable: 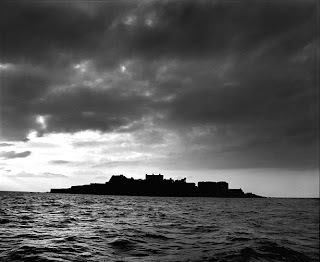 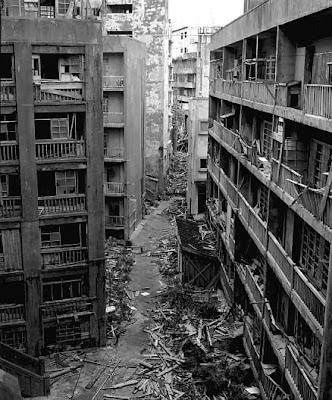 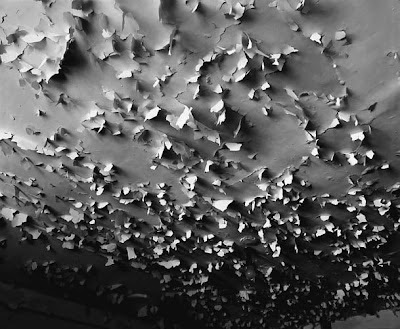 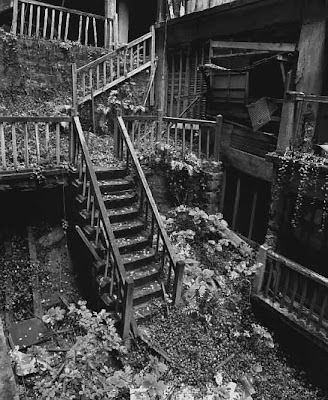 I was so taken with these photos that I followed the link back to the source, Mr. Saiga's own website. Mr. Saiga, luckily, has whole portions of his site duplicated in English. I found more pictures, all beautiful and eloquent, but then I looked further - and found that Mr. Saiga had actually been there in the 1970's just before the people were due to be moved off the island, and he had taken pictures.

It is these pictures which truly caught my imagination, especially when compared with the later ones. The place is already in a state of decay, as if it was already forgotten and the people living in it were strange, living ghosts. And yet people continued to live, going to school and the bath-house, working and gossiping, running through what would soon be ruins, even while they chose what to pack for their departure. I found myself asking: how did they feel, knowing their home was already a ghost-town? What was it like, knowing they would soon leave for parts unknown, their old home crumbling to ruins behind them? 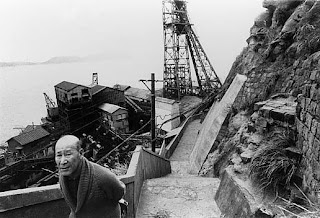 Both series are extraordinary, especially if seen backwards, with the later, abandoned images first. The photographs of hasty departure, long decayed, linger in your mind as you look at the images of people occupying the very same decay. It gives me the oddest feeling in the pit of my stomach to see the people laughing, the children playing, in what seems already to be a graveyard. It is fascinating and full of pathos. 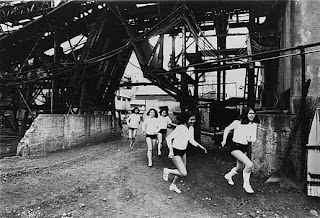 Mr. Saiga speaks of coming to the island in the knowledge that it would soon be empty, and having one of those rare experiences with one's art where one is possessed, and must capture everything. He says:

"It was just since the previous year that I had decided to pursue photography seriously and started taking photographs. The crudeness of this series is obvious. Sentimentalism also lurks from behind. When I see the pictures now, I feel, before everything, embarrassment. But however unskillful the pictures might have been, I honestly feel that my desire to take photographs then was stronger than it is now.
I saw, at close range, islanders in pain for leaving, while I was, myself, at a loss because of the difficulty in taking photographs. I plunged myself into photography, while asking the meaning of life. In those days, photography was everything for me." 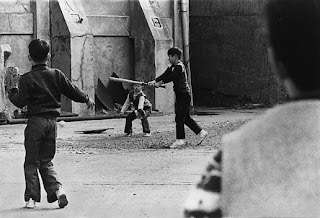 I can see why he was captivated. Places that have been lost but aren't gone have a peculiar attraction, perhaps, in my case, because of my own experience with loss of place. Pompeii, for example, or Bodie; Petra and Palmyra and Angkor Wat. Places that are both lost and gone, though, are even more mysterious, more terrible, because they live on only in the minds of the people who saw them or heard about them - or in obscure photographs which make no sense without someone to decipher them. Think of Dresden, of Ur. Memory is the only place they truly exist; memory and legend. But most lost places only leave a hole in the world for some people, and when those people are gone (an all-too simple and easy thing with our flimsy little bodies), their places will dip below the surface of history without a ripple. 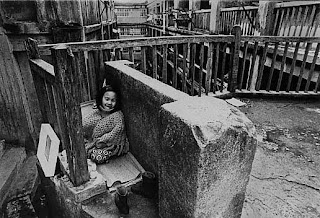 It must be odd growing into an old person, watching one's world become more holes than not. I think of my rapidly-growing sense of a slipping existence, a past which exists only in my mind, and it seems like a form of insanity. I clearly see, clearly know about things and places which are patently not real. Sometimes no one else even remembers them: so are they real? Were they ever real? 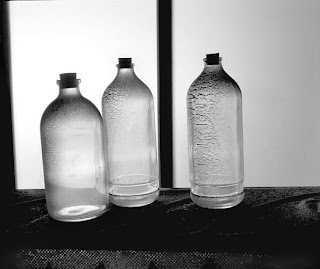 I was always one of those weird people who were conscious of things going away, I don't know why. I liked to listen to old peoples' stories, because they were stories, and described things to me in ways that left traces against the things which were there for me, enriching them and informing them. But now many of those people are gone, themselves, leaving yet more holes. And their stories? I wonder sometimes if for some of them I was the only person who ever did listen. 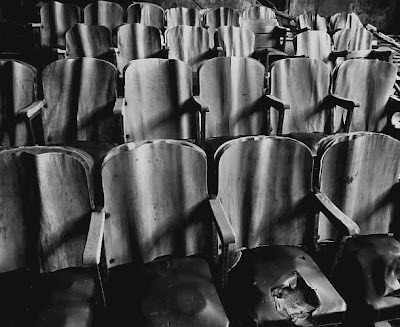 Which is why, perhaps, I work so hard to keep my Cabinet. Like the people in Gunkanjima, I know there is not much time before I am asked to leave, so I will pack as much as I can while I wait. And save what I can of others' stuff, too. 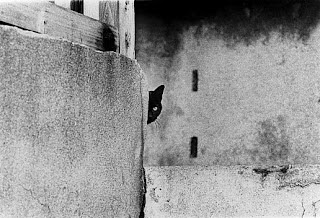 Thank you for this beautiful post! I enjoy your Cabinet of Wonders so much, and I found this entry incredibly moving. I just wanted to let you know how much happiness (and wonder!) you bring to a total stranger across the interwebs.
Thank you.

I also thank you, Heather, for this most touching short essay. Your memories and the beautiful images of Mr. Saiga, though a continent and a culture apart, reflect the universality of the human experience. Such connections make for wonderful art and worthy contemplation.
A faithful reader.

In sixth grade, my best friend and I had a place we called "the sacred place." It was in a meadow. A fallen tree was there, and we would sit on it and tell each other the secrets of our burgeoning sexuality. In a story, the fallen tree would have been a premonition. The meadow is long since developed into housing.

Many places of my childhood are lost, but I moved around so much, maybe I don’t care as much. Always new horizons. But sometimes I wish my grandparents, long dead, still lived in their little pink and green house in North Carolina. We would always visit there, between moves, and I would go around and look at everything, enjoying that they were still the same as they'd been the last time. I was sad when I learned that the young couple who bought it got divorced.

Mr. Saiga's account mirrors the island. In his passion to photograph the passing island are the seeds of his own decay as an artist. Even as he's beginning, he's ending. "But however unskillful the pictures might have been, I honestly feel that my desire to take photographs then was stronger than it is now."

"I was always one of those weird people who were conscious of things going away, I don't know why." Maybe you have Buddhist karma. You know deep inside the truth of Samsara, the floating world. Or Italian karma. (Your Halloween entry.) In Venice, they put little posters of the dead on the walls in the sestieri: a picture and the name and dates, and maybe a little tribute. Paper shrines.

It's funny to be so connected with impermanence, isn't it? Seems paradoxical.

And God Bless you for being the one who does chronicle these things going away! I love your blog. I am amazed at the perspective you bring to things you blog about. Keep it up!

Happened on an abandoned house yesterday, wish I knew what made the people who once lived there leave so fast: 25 years of dirt and nature, but glasses and plates still on the shelves and ancient food in the fridge. A skirt hanging neatly and still white. Saddening and also quite a bit creepy. I wish I'd been able to trace the history of that place.

That quote from Mr Saiga is so strong.

(Wrote a ton about entropy here, better left as is.)

Every bit we do matters, agreed.

Your posts always fascinate me, but this really resonated.
I have moved away from things a lot, from people and lives. The changes that come to them always seem partly my fault, for being gone.
But there is something beautiful about the transient, too. It haunts and resonates.

Thank you for sharing these things...