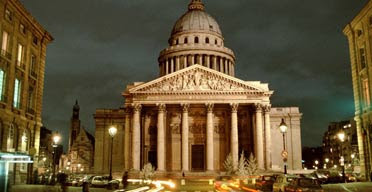 I don't usually simply pass on things I hear about from other blogs, but this is simply too good to pass up. A friend of mine found it on Crooked Timber:

"For a year from September 2005, under the nose of the Panthéon's unsuspecting security officials, a group of intrepid "illegal restorers" set up a secret workshop and lounge in a cavity under the building's famous dome. Under the supervision of group member Jean-Baptiste Viot, a professional clockmaker, they pieced apart and repaired the antique clock that had been left to rust in the building since the 1960s. Only when their clandestine revamp of the elaborate timepiece had been completed did they reveal themselves....

Klausmann and his crew are connaisseurs of the Parisian underworld. Since the 1990s they have restored crypts, staged readings and plays in monuments at night, and organised rock concerts in quarries. The network was unknown to the authorities until 2004, when the police discovered an underground cinema, complete with bar and restaurant, under the Seine. They have tried to track them down ever since.

But the UX, the name of Untergunther's parent organisation, is a finely tuned organisation. It has around 150 members and is divided into separate groups, which specialise in different activities ranging from getting into buildings after dark to setting up cultural events. Untergunther is the restoration cell of the network."

Back to the NaNo!

You know the saddest part of this story ? Nobody at the Pantheon remembered to wind the clock, and it stopped again.

Oh! That's terrible! Surely, though, they can set up a guerilla winder...? The thing I love about this story is how much like Hugo Cabret it is. Maybe some orhpaned child, needing a home, could live inside the dome... and wind the clock...

:)
That would be nice. Like Gavroche living int he belly of the old elephant statue that used to be Place de la Bastille.
Saw this article and thought of you. I am glad it found its way to you.