or: The Thing Inside

Caution: may meander into the squeamish zone in both words and pictures... be warned.

I don't exactly know why I am fascinated by cojoined twins. Sometimes I guiltily cruise YouTube, watching videos about successful and unsuccessful separations. Very often the way the twins are joined is terribly difficult: at the top of the head, sharing organs, or with one twin unable to function because of their relationship to the other child. One of the most famous examples of a successful pair is Abigail and Brittany Hensel, a pair of "highly symmetric dicephalic parapagus" (ie, joined at the bottom, with two heads). It is difficult to tell but it looks as though they only have two arms, as well. They are both conscious, functioning girls with very separate personalities and interests, and are growing up apparently without problems, a very unusual case. 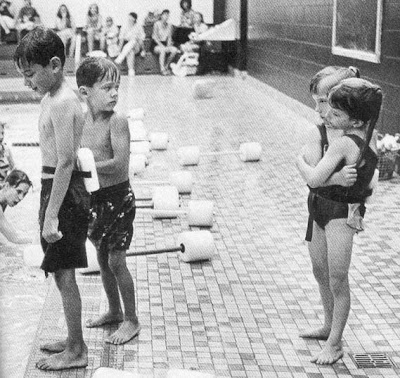 In fact, when you look at how their body is arranged, it's nearly miraculous: they have two heads and two stomachs but their small intesting has a "Y" intersection which, with a few minor problems, works fairly well. They have separate spines but one ribcage, two hearts and four lungs, but a shared diaphram. They can only feel their own half of the body, but they can do things such as type, ride a bike, and drive a car without mishap or misunderstanding. It's rather amazing. More often, cojoined twins do not do well. Their mortality rate is about 75%. There are just too many complications, and all the things which seem to have gone right for the Hensel girls could just as easily fail through lack of alignment or poor formation of organs, which leads to their failure. Twins that are cojoined at the head often cannot function together, but separation can lead to the death of one or both of them, as the brains are involved.

What causes twins to be cojoined? There seem to be two separate theories on that. The older theory, the one I'm more familiar with and which leads to cases like the Hensel girls, is that during development the fetus separates as it does in the case of identical twins, who are two children made by one fertilized egg splitting completely in half. Except that in the case of cojoined twins, the split is incomplete. So you get children who share pelvises, skulls, etc.

Another theory is that in some cases, "a fertilized egg completely separates, but stem cells (which search for similar cells) find like-stem cells on the other twin and fuse the twins together." [wiki] Which implies that in the kinds of cases for whom this theory would apply, the joint is less extreme: some fleshy part of the (mostly separate) twins is joined. In the case of Chang and Eng Bunker, a pair of Thai cojoined twins who traveled with P.T. Barnum's circus for many years and from whom the term "siamese twins" comes, they were joined by "a band of flesh, cartilage, and their fused livers at the torso." This type of cojoining is very easy nowadays to separate. 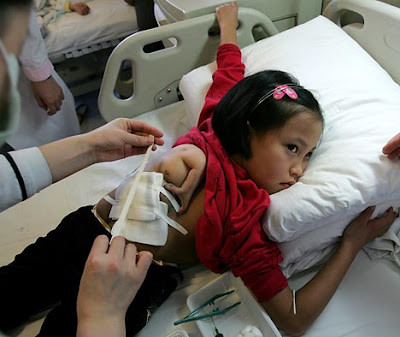 Then there is the scenario where one twin is described as "parasitic," because it does not have a heart and/or a head of its own, and therefore lives off the circulatory system and resources of its twin. Parasitic twins can be attached in many different places, and are often much smaller than their fully-formed twin. A well-known example of this was the recent case of Lakshmi Tatma, found in a remote area of India at age two, who was joined to her twin pelvis-to-pelvis (with the twin between her legs). Thirty-six doctors took turns separating her spine and moving her bladder, then moving her pelvis together so her legs could point downward instead of off to the side. She had one non-functioning kidney, so the doctors replaced it with one of her twin's; she was then put in a cast designed to keep her legs together. A year later, it seems she was doing fine, beginning to learn to walk, and so on. 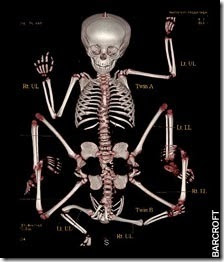 Parasitic twins generally do not improve the life of the main twin, not just because it is uncomfortable or embarrassing, but because it is a drain on their health and resources. One form of parasitic twin, called fetus in fetu is another, more rare and often devastating case of poor twinning, where the fetus of one twin, it seems, actually forms around the other, in effect born with another body inside it. One man, in India, lived for thirty-six years with his twin inside him, growing as he grew. I can only imagine how much weight it was to carry around, and how much he must have eaten to keep them both healthy.

Another boy in India went to the doctor because of his abdominal swelling, which was seen to move. A nearly-fully-formed twin was found inside him, with hair, toes, arms, legs, and even a vague face. This kind of completeness is rare in parasitic twins, especially among fetus in fetu, which tend not to be "alive" in the sense we think of, but rather a sort of growth in human form. 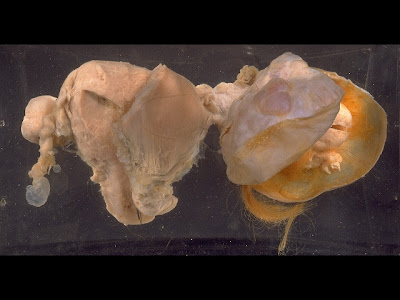 There seems to be a grey area between a fetus in fetu and what is called a teratoma: a kind of encapsulated tumor which contains "tissue or organ components resembling normal derivatives of all three germ layers. There are rare occasions when not all three germ layers are identifiable. The tissues of a teratoma, although normal in themselves, may be quite different from surrounding tissues, and may be highly disparate; teratomas have been reported to contain hair, teeth, bone and very rarely more complex organs such as(...) hands, feet, or other limbs." [wiki] ...or tissues from various organs. Teratomas are more common, and more benign, in women and girls, because they often form on the ovaries, where undifferentiated cells can be found; in men, they are more often malignant, for no reason that I've been able to find. Teratomas are considered to be congenital, in other words, they are present at birth, but not found until later on. 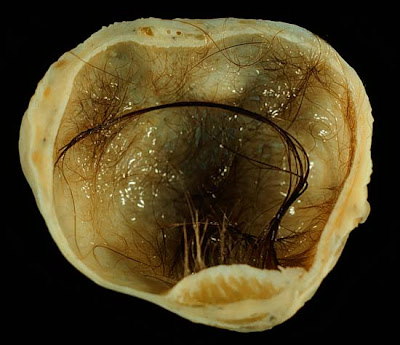 You can get teratomas in your brain or other organs, on the outside of your body (such as on the skull sutures or on the back of the pelvis), around your tongue and in your throat. I find them incredibly creepy, because they can contain pieces and parts of a person, encapsulated in a little pod in the body, as if someone had been trying to form, and failed miserably.

Curiously, I don't always find the parasitic twin phenomenon creepy; as the wonderful Human Marvels website describes, in the case of Ernie Defort, who was born with his "brother" Lem attached to his sternum, some people, if left to themselves, will become quite emotionally attached (hur, hur) to their extra parts.

It strikes me that this is not so different from the imperfections we all experience: if left to ourselves, we can become used to them and even like them, as being an integral part of ourselves. It is only when we listen to the media, or other external voices, that we begin to doubt who we should be.


Some interesting books on freaks/human marvels (which is what many cojoined twins and people with parasitic twins did to make a living in the old days):

Monsters: Human Freaks in America's Gilded Age: The Photographs of Chas Eisenmann, a book of really quite wonderful photos taken in the late 1800s by Mr. Eisenmann in his studio in New York.

American Sideshow, a lovingly-detailed and warmly described history of sideshow performers in America from the 1830s to the present. With recommendations on Amazon by some of the participants.

More info on parasitic twins, thanks to The Human Marvels
at 1/30/2009

As an identical twin(I have a twin sister), I find this all so interesting. I often have wondered why we separated while other twins didn't or don't. Growing up, I didn't really know what the difference between an identical and fraternal twin was. Now that I do it is really freaky! Identical twins are not genetic-they are considered a mutation-there are theories on what causes the fertilized egg to spilt, but so far, no one is 100% sure.

We share the same dna and we have our own language. We have a special esp thing going on and more. She has 2 little boys and I have no children. Her boys call me "mom". Her oldest(6) finally said it was just too confusing to try to call me "Auntie" and since we are the same person "split" I am really his mom too-smart kid! His little brother agrees. So, I get to be a mom without giving birth!

Also, growing up, our best friend was our 1st cousin who we shared a love of science with. He was intriqued by his indentical twin cousins. He grew up to be a doctor and now studies conjoined twins-what makes some split-can he isolate a specific gene or moment in utero when this happens and more. He has also discovered many cases of adults(usualy in their late teens or early 20s) who have a twin in their abdomen. And, like you have written here, with women the twin is in their uterus or ovaries and with men somewhere in their intestines. Our cousin says there is still so much to learn and that we will never figure it out!

Ha! And, I am almost 40 and haven't lived with my twin since high school, and still say things like , "our cousin, our mom" and I am by myself talking to someone-I am sure this sounds crazy! All I know for sure is that the things that my twin and I say, think and do and did make complete since to us but compared to the rest of world and what is considered "normal", we freak people out. Nature has its blips and bleeps and people are part of this. Twins are part of this as well!

From the golden age of teratology:

Also at the Mutter Museum: "A death cast made of Chang and Eng is on display at the museum. A chair that was built specially for the twins to sit in is also on display along with their preserved conjoined livers."

Ok, I have to wonder how these teratomas fit in with the movement to declare that life begins at conception. Ooooh, that darn science is always meddling in things it shouldn't!!
Seriously, thank you for making me aware of this.