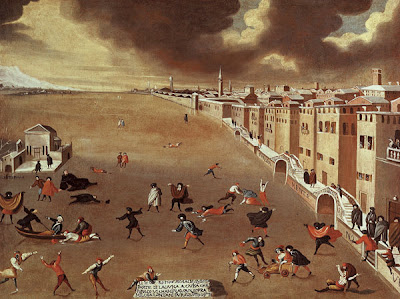 Sliding on a frozen lagoon, Venice, 1709

I have to be careful not to visit the New Scientist website. It's one thing for my household to get literally stacks of a weekly magazine that is unfailingly fascinating, whether you're a scientist or not, but when the articles from that magazine are available in a nonlinear form... well, it's just easy to get lost in Fascination Soup.

Here are a few articles I came across tonight, by accident:

1709: The Year That Europe Froze - What happens when Europe experiences the coldest winter in 500 years: "The sea froze. Lakes and rivers froze, and the soil froze to a depth of a metre or more. Livestock died from cold in their barns, chicken's combs froze and fell off, trees exploded and travellers froze to death on the roads." Wow!

Nanoplumbing: More than Just a Pipe Dream - When a scientist tries to reproduce tiny pores that regulate the flow of water into a cell in order to understand them better, he finds himself with much bigger fish to fry: "Nanotubes have not only helped researchers like Hummer understand water flow in proteins, but they are also enabling scientists to devise a host of nanoscale plumbing parts - such as molecular pumps, gates and valves - capable of moving and filtering everything from salty water and hydrocarbon fuels to gases such as carbon dioxide. It seems that these humble tubes could hold the key to cheap desalinated water, better fuel cells and new strategies to tackle global warming."

Genetic Roots of Synaesthesia Unearthed - I've always been interested in synaesthesia (here's a past post on the subject). Now they think they've found the genetic area where it lives: "A region on chromosome 2, which has been associated with autism, exhibited the strongest link. This is particularly intriguing: the autistic savant Daniel Tammet, for example, possesses extraordinary abilities and also has a combination of the two conditions, as do some other autistic savants... The region is also thought to be involved in epilepsy - which Tammet also suffered from as a child - and this could indicate that the three conditions may share some underlying genetic or neurological mechanisms."

How the "Mouse Man" Changed Medical Research - "'The "Mouse Man', as he was known on campus, was trying to create the first inbred lab animal - a strain of mouse whose genes would be stable and identical. Such a mouse would allow biologists to reliably replicate their experiments for the first time. His professor said it couldn't be done, but the Mouse Man proved him wrong."

Ten Extinct Beasts That Could Walk The Earth Again: It's true that sequencing the DNA of extinct creatures is fraught with difficulty. But, says the author, not impossible. It may even be fun: "Assuming that we will develop the necessary technology, we have selected 10 extinct creatures that might one day be resurrected. Our choice is based not just on feasibility, but also on each animal's "megafaunal charisma" - just how exciting the prospect of resurrecting these animals is... Of course, bringing extinct creatures back to life raises a whole host of practical problems, such as where they will live, but let's not spoil the fun..." Then he goes on to list ten possibilities in a very interesting way. How fun is that?

This is just a random sampling from this week's website. It goes on and on! The thing I love about the way it's written is that, unlike many scientific magazines, it's lively, it has actual art, it only talks about interesting things, and (best of all), it has a sense of humor. They don't shy away from puns, for one thing (always endearing), and they have silly articles sometimes which are, despite their silliness, hooked into real science. At the back there is the Last Word, where people can ask questions that seem obvious but nobody's ever thought of (such as one child who wrote in wanting to know "When will Fluffy be bones?"), and the "histories" section is really quite amazing. I could do a blog post on nearly every one of them.

And, unlike many pay-to-view websites, they actually tell you something about the subject before they cut you off. So even if you're not a subscriber, it's pretty interesting.
at 2/09/2009

I've been reading this magazine since the 70s, a subscriber for a decade or more.

I strongly urge you to get the print subscription, it's my best entertainment value (except for the Magazine of Fantasy and Science Fiction...)

Oh, I do! And I can't recommend it highly enough, if you've got the dosh.