Menageries: Exotics in a Box 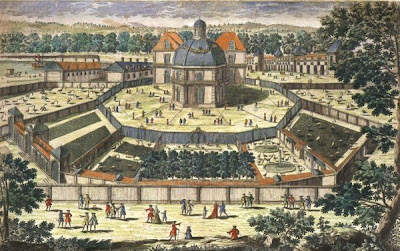 Historically, menageries are to zoos what Wunderkammern are to museums. In other words, like Wunderkammern, menageries were expressions of power and influence, collections of oddities from around the world designed to wow people and give the wealthy something to design, maintain, and pay attention to - in effect, an expensive hobby that also served to prove the owners' wealth and cultural prowess. As Wikipedia says, exotic animals, alive and active, were less common, more difficult to acquire, and more expensive to maintain."

Originally, menageries were the purview of royalty, a place where exotic gifts from foreign powers were kept on display as a reminder of the royal family's many good relations with powerful people around the world. In 1235, for example, a menagerie was begun at the Tower of London when Henry III received a gift of three leopards from Frederick II, Holy Roman Emperor; the menagerie was opened to the public during Elizabeth I's reign. Two hundred years later, "the price of admission was three half-pence or the supply of a cat or dog for feeding to the lions." [wiki] 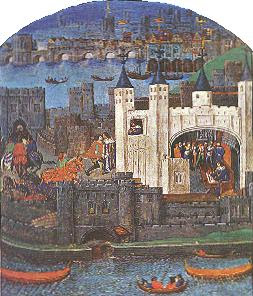 Louis XIV's menagerie at Versaille, begun in 1664, was the first example of a Baroque-style menagerie, being built on a circular layout around a beautiful pavilion, so that all the pens were on view when one strolled around the pavilion, but not on view from outside. 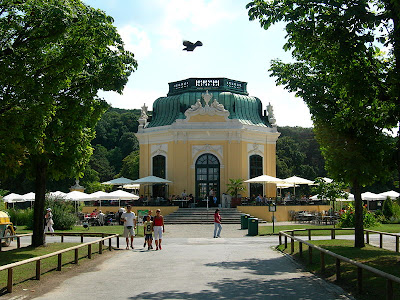 In the nineteenth century, with the influx of Scientific Thinking and the move from simple curiosity to logic and a more definitive view of the cataloguing of the universe, most menageries were displaced by zoological gardens, which reflected a more public and educational approach to the keeping of exotics. The only remaining Baroque-style menagerie is the zoo in Vienna, which has modernized enough to make the animals comfortable without losing its essentially radial layout.

I think about the progression from the menagerie at Versaille to the ulititarian zoos of my youth, where tired-looking animals sat or lay in cement enclosures. I'm sure the animals didn't have it any better in the early days, but it seems to me that a royal menagerie must surely be a more intriguing experience than watching the most annoying person in one's class throwing popcorn at beautiful and listless tigers. It seems to me that a royal personage could be more inclined to try to make the enclosures interesting to the eye.

Besides that (and always setting aside early ideas about how little animals cared about their environment), it must have been amazing to be invited into the inner circle, so to speak, and promenaded past animals which surely must have felt more mythological than concrete.

I came across a reference, looking into this, to an exhibition at the Getty a couple of years ago, of paintings done of animals in menageries. The featured artist was Jean-Baptiste Oudry, a rococo painter:

"Jean-Baptiste Oudry was one of the finest painters of animals...in 18th-century Europe, and he employed his prodigious talents...to produce life-size paintings of star specimens from the menagerie...of French king Louis XV. Never intended as an encyclopedic zoo, the Versailles menagerie was compiled through royal commission and diplomatic gifts. Exotic animals were imported on merchant ships along with sugar, coffee, and indigo, and were intimately connected with colonialism and the luxury trade. Oudry painted these animals as individuals. He used portrait conventions such as theatrical poses, dramatic light effects, imaginary landscape backdrops, and sensual color to give his paintings great drama." [from the exhibition website, above] 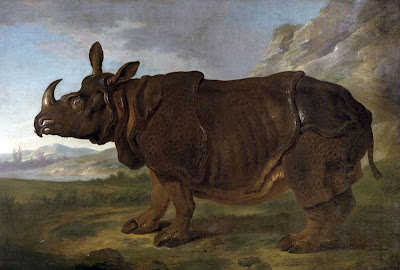 The thing about these paintings is their formality, the way the creatures seem to pose for the artist. They are not, in any sense, natural, though they are very lifelike. They remind me of the stuffed specimens in old natural history museums (like the one Curious Expeditions went to in Romania), for exactly the reasons stated above: the unnatural stillness; the artificial environment; the strange lighting. And yet, they are huge, real artworks, something from another time. 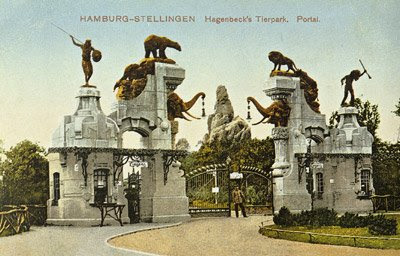 "The entrance to Hagenbeck's zoo in Hamburg, c1910. Hagenbeck was a flamboyant character who supplied zoos and circuses with wild animals and native people. His zoo was the first to remove cages and build fake scenery and mountains so the animals could be seen in their 'natural' habitat. The entrance expresses the victorian confidence in their command of the natural world perfectly." [Thanks to Tim Hunkin. To me, both these photos (above and below) remind me of nothing so much as If I Ran the Zoo, by Dr. Seuss. 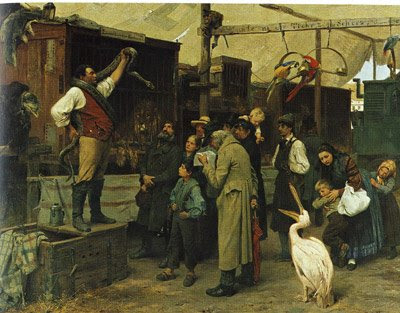 Of course, like all things, the menagerie must in the end come to the common person, who until recently didn't travel much. Traveling menageries became quite the thing, particularly in America, where distances were wide and people easily amazed. During the Civil War, however, these traveling menageries all but disappeared, and were swallowed up into the traveling circuses, which continued to flourish. Even small circuses were able to collect animals from the dying menageries, and this added attraction actually contributed to the health of circuses for many years. Nowadays, even Ringling Brothers and Barnum & Bailey, once the "World's Greatest Menagerie," is considering letting go the lions and tigers and concentrating on what is humanly possible.

Zoo: A History of Zoological Gardens in the West - a very different presentation of zoos through history, looking at the sociological side of how people view wild animals and how that has changed over time. Really, a marvelous-sounding book, with over 400 unusual illustrations.

The Fantastic Menagerie Tarot Kit - based on the drawings of J.J. Grandville, an illustrator of strange animal-headed people.

The entrance of the zoo of Hamburg reminds me a little of that in Rome.

This is a complete non sequitur, but where I live "cabinet" is colloquial for "ice cream milkshake." So for the first time today I thought of your site as the Ice Cream Milkshake of Wonders. Delicious.

I know Frederick II and Charlemagne both had elephants, and I believe the latter actually used his in battle.

Isn't the portrait of Clara the rhino marvelous? I fell over it while researching some of the evolution of our knowledge of rhinos earlier this year. I was on a binge making pink and orange rhinos. Durer's rhino is fabulously armored, but Oudry's is a real individual.