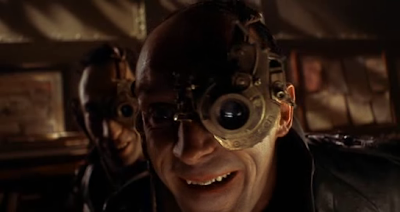 Last night I had a dream where hands had become obsolete. For everything one wanted to do, one selected a tool that attached to one's arm, and then used the tool to do the activity. Golf clubs, oars, hammers, even cutlery -- they all had little slots in various walls; and when you wanted to do that activity, you simply stuck your (obsolete, apparently) hand into the ends that stuck out, and they would click onto you, becoming part of your body.

This is, of course, ridiculous, because hands and arms are one of the most amazing examples of evolutionary engineering that one can find in nature. Ultimately, a huge number nonrotational mechanical devices -- pliers, pistons, and even backhoes, to name a few -- are directly related to the structures of our hands. Why (as in my dream) would anyone make tools that bypass that extraordinary usefulness?

But it was just a dream.

In 1942, Robert A. Heinlein published a story called Waldo, about a man who is weakened by disease who invents a device (nicknamed a "Waldo") which allows him to magnify his own manual strength: the movement of his own hand would direct the device, which was also hand-like. 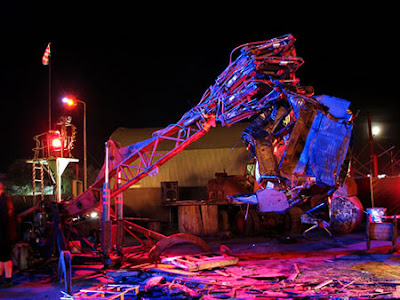 The Giant Hand, which is waldo-driven and was also at Maker Faire - and anyone could sit in the driver's seat

Since then, of course, remote manipulators (actually called waldos) have become common, especially for magnifying size and strength or reducing movements to microscopic size. For the most part, they have been used to reproduce hand movements; but this has progressed to things like powered exoskeletons, a la Ironman or Aliens (curiously, some of the real life ones were actually inspired by Heinlein, again - this time the book Starship Troopers). True, the contemporary exoskeletons can only walk a mile in half an hour, and their power packs don't last long; but someday, of course, we'll all be fighting wars with faceless super-soldiers. 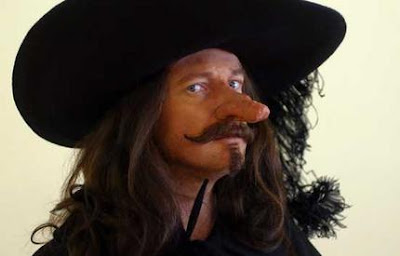 Cyrano de Bergerac must have had a good sense of smell

Much of the funding for exoskeletons has come from places like MIT and the Pentagon, homes of ubergeeks and soldiers -- thus the dream of making oneself superstrong and impervious. True, the appeal of Ripley in the cargo loader in Aliens saying "Get away from her, you bitch" is enormous. But why can't we create waldos for other uses, perhaps to enhance more peaceful parts of us? I'd like to see sensory enhancement, not just moving and lifting. Waldo noses, for example, that allow you to smell better or in weird and interesting ways -- imagine smelling the difference between oxygen and helium, or being able to have a nose like a hound dog! I'd love to be able to become a SuperTaster , like in the They Might Be Giants song. Or perhaps someone could make Steampunk-like eye enhancers, like in City of Lost Children, that let you see infrared, ultraviolet - or even (gasp) real X-Ray specs?

There are actually waldo noses, although sadly they do not connect to anyone's sense of smell. And of course, visual enhancers have been around for a long, long time (say, three thousand years or so?). At Maker Faire two years ago, too, I saw Elly Jessop's wonderful Opera Glove, which she developed in MIT's Media Lab. This shoulder-length Glove was a sort of Voice Waldo, allowing her to catch her voice and manipulated it with an interactive glove. Very cool! In fact, a nice note (sic) to end on: