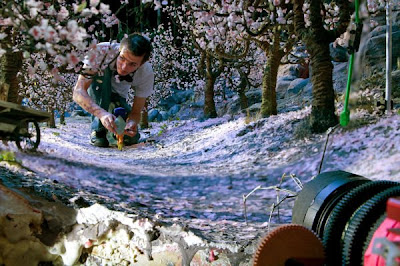 In case you hadn't noticed, I don't always pay attention to publicity campaigns; so it was quite by accident that I came across two references to the movie being made of Neil Gaiman's chilling story Coraline, being made entirely by hand by an apparently very talented crew at LAIKA, an animation studio in Portland.

I had seen clips of the film and heard about it a little from Mr. Gaiman's own lips when he came to read on his recent journeys; but, well, as for publicity... I'm just dyslexic about things like that.

So I was very taken with the Coraline website's focus on things being made with peoples' hands, and the little vignettes of different people doing different tiny but important jobs made me very happy. So often you get someone working at Pixar or someplace whose whole world, for awhile, is to make fur moving in moonlight; but you never actually meet these people. It is nice to see the folks making this incredible stuff - in fact, it's nice to see people making, period. It gives me hope and joy. I can't help but think it must make Mr. Gaiman feel extraordinary, to be the spark at the beginning of such a creative fuse.


You can see "all the clips, trailers, and behind-the-scenes featurettes" at the official Coraline YouTube site (thanks to everyone who has helped me out on this). 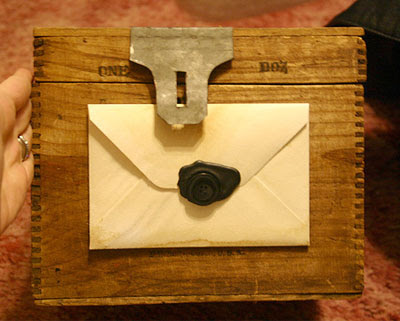 On top of this, of course, there is the furor (a total unknown to me until yesterday) about the boxes which the crew of Coraline are putting together and sending to their favorite bloggers. These are real, actual boxes with real, actual stuff in them, being sent via snailmail. So, what we have is a crew of people who work with their hands sending love-letters of a very visceral sort to people whose work they access virtually; and the bloggers then turn around and blog about the boxes, creating viral publicity in a virtual medium about a movie which is all about being made by hand. I find this whole thing absolutely fascinating, because it underlines a point I've been trying to get my head around in the paper I've been writing: that certain blogs are about accessing a sort of truthful physicality which one might not be able to experience in the real world. It's away to access authenticness.

Like in the old age of Wunderkammern, explorers and adventurers went out into unknown parts and came back carrying artifacts from the places they'd been. These artifacts would find their way into the hands of collectors, who put them all together, showcasing their extraordinariness and trying to deconstruct what they were about.

Now there are bloggers, such as D and M, over at Curious Expeditions, who go out into the world and bring back oddities and wonders to their fellow bloggers, who collect their artifacts (pictures and words) so that others may see them and wonder. Some bloggers are more interested in made things, ideas, or ways of living; but they work to bring those realities to those of us who can't experience the things in context, and make our lives richer.

So it's a very interesting thing to see someone literally playing with this metaphor, sending physical, Wunderkammer-like artifacts to virtual Wunderkammer-makers. Who then turn them virtual in order to display them. A mobius strip of wonder, if you like.

My only question is - are they enclosing actual bits and pieces from the film-making process? Because that would take it to a sort of metalayer of mobius-ness. 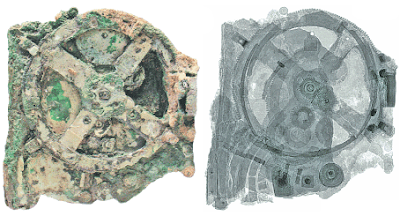 The other thing I've come across just today [via Slashdot] is a nice article on a man who has now managed to recreate the Antikythera Mechanism more accurately than his previous attempt:

"The added details and precision of the new model are based on the breakthrough research by the The Antikythera Mechanism Research Project, a joint effort by researchers from Greece and the United Kingdom. They were able to plumb the depths of the device, comprised of 81 separate pieces (including several fused together over time), and decipher many more of the inscriptions by using high-tech hardware and software..." [find out more about this, and the hardware and software, here].

In other words, all the things we've been hearing for several years now, about new systems for seeing inside the mechanism, have been paying off splendidly in - you guessed it - physical form. Hooray! We get to see it in action!

You can also see a 2006 slideshow of the researchers actually using the equipment here, if you feel so inclined.
at 12/17/2008

there is an artist i really love who makes these awesome boxes of "artifacts" from a history that never was, his name is alex- here is the link to his awesome blog and artwork.

have you heard of him?

I actually did meet the guy responsible for the "puffs of dust on the ground when characters walked" in Shrek.

Then click "skip trailer" (or watch it if so inclined).

At this point you can select trailers, films, or extras.

PS: I enjoy your site!

All the Coraline short documentaries are up at YouTube at:
http://www.youtube.com/user/CoralineFilms

Thank you, Jennifer! I did look on YouTube but did not know they had their own little section. If you look under a general "Coraline" heading, you will get everything but. Of course, if I'd been smart enough to look for "moustachio", I probably would have found something...!

Yes, I have heard of alex cf, I like his stuff a lot!

It's got all the clips, trailers, and behind-the-scenes featurettes

It is wonderful that stop motion films are still being made. I find deeply disturbing the 3d CG animated films with "animal characters", because they elide the natural world with a more agreeable anthropomorphized version. Wondering if Dave McKean is involved with Coraline...I would imagine so, will check it out.

great post! thank you. i hope you don't mind me linking to your blog. come visit my new blog -- oldschoolhandmade.blogspot.com

Another pleasure to read, enlightening entry. Thank you! I haven't read Coraline but just that little snippet is enough to whet my appetite.

The fact that each of these boxes was handmade and filled with actual movie artifacts blows my mind! (And makes me a bit jealous as well...) Definitely a unique way to promote a movie though, and Coraline itself didn't disappoint, so good stuff all around.

Good link - it talks exactly about what I was sensing about their tactics for buzz.