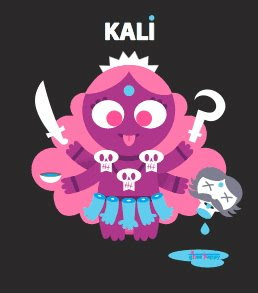 I had a few hours to myself in San Francisco the other day (a wonder in itself), and I happened across The Little Book of Hindu Dieties, a remarkable book in that it seems to conflate Shiva, Vishnu and the rest with the Power Puff Girls. I was extremely taken with the image of Kali, so cute! And yet with the severed-arm skirt and the head in her hand...

The Little Book is the product of Pixar's Sanjay Patel, working via his gheehappy site, where you can get books, prints and clothes with the images on them. I really wished I could get a t-shirt of the Kali in the book, but alas, kids' sizes only (these links here don't work but a fix is promised). The links page is of some interest, too.

Then I found that, of course, bOINGbOING had already showcased GheeHappy, including a plush Kali doll made by a friend of Patel's: 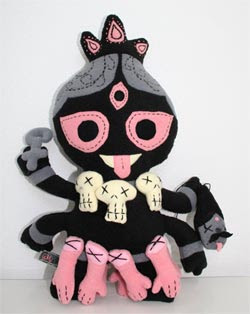 It was tempting to buy the book, given that my kids are big on Hindu mythology comic books, which tell the gazillion tales about the panoply of Hindu gods. My elder daughter used to even talk with strangers about "severe penances," which she learned about while reading the story of Parvati. That was always interesting to try to explain; lots of sidelong looks. The comics can be a great teaching tool, and very entertaining (though you may have to suffer the odd looks if your kids take them to heart). You can get hindu comics here, if you're interested.

In any case, this made me think about going to check out what's been happening with Nina Paley, who created Sita Sings the Blues, an indescribably fabulous set of animations which, last I saw, were just that: a series of wonderful shorts from the Ramayana which she was hoping to parlay into a feature film. Now I find she has done just that, to my intense joy - but guess what? They moved the copyright year back again. She is having trouble with rights for the songs.
[editor's note: This is what happens when you try to get a blog post out in very little time after not sleeping enough. I need to check my sources! I am still trying to "rediscover" the source where I found out about this... More soon. In the meantime, it looks like there will be a big fight in 2018 when they try to extend again.]


I have to say, copyright is a tricky business - and I do mean business. Every time it looks like Disney's oldest character, namely one Mickey Mouse, is about to go out of copyright, our obliging (but certainly not corrupt; never that) government takes it into their heads to extend the date when things go out of copyright. Why is this? No one knows. Surely it couldn't have anything to do with the fact that Disney is so fabulously rich, that they can afford the most expensive lawyers to slap down independent artists and perhaps to lobby continuously about the copyright thing. No, there must be another reason.

I'm waxing sarcastic. Unlike me to be annoyed at something like this, but I have friends who have been on the wrong end of a Disney lawsuit. And I do keep hoping they'll lose the copyright one of these days. Everyone else has, throughout the history of copyright. It's supposed to be fair, right?

In Nina Paley's case, she built the shorts around songs which were due to go out of copyright, and then the dates moved were out of copyright, but then found she had to pay for synch rights - and of course, the person or corporation who held those rights is now asking far more than any individual could possibly pay. So theoretically she could be up as a felony criminal for using them without permission. Sigh. So it might never be released.


I despair at the fact that this fab-o movie came to San Francisco a couple of weeks ago but I missed it. The trailers look marvelous. Go check it out, and keep an ear to the ground about the copyright thing; Ms. Paley has a blog, a very smart and somewhat disillusioned chronicle of neat stuff. It's a crying shame it can't be released. The movie has won more awards than I've seen attached to a single animated work before. Stunning.

Here's the trailer, in case you wanted to see it:

That is bad news about Sita. I love the bits I saw of Nina's blog.

Those videos are fantastic. They remind me of the old WB musical cartoons from the 40's, which I hated as a child (I preferred a wisecracking Bugs Bunny to all that singing) but which I grew to love when I was older.