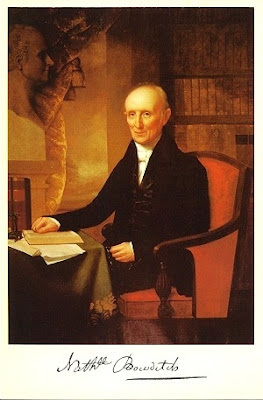 I was looking through something the other day and I came across a reference to someone named Bowditch. Immediately, my mind was flooded with images from the life of Nathaniel Bowditch, a mathematical and navigational savant in the late 1700's and early 1800's, whom I read about at age 12 or so in a wonderful biographical novel for middle-graders called Carry On, Mr. Bowditch.

Bowditch was the son of a cooper in Salem, Massachusetts who left school at the age of ten to work for his father. At twelve he was indentured for nine years as a bookkeeping apprentice to a ship chandler. They were kind to him there and he was given access to the library; being immersed all day in numbers, and having a sharp brain, he became interested in some of the more complex ideas surrounding math, spending his days learning all about what it takes to outfit a ship and his nights studying.

"In 1787, aged fourteen, Bowditch began to study algebra and two years later he taught himself calculus. He also taught himself Latin in 1790 and French in 1792 so he was able to read mathematical works such as Isaac Newton's Philosophiae Naturalis Principia Mathematica. At seventeen, he wrote a letter to a Harvard University professor pointing out an error in the Principia... Serendipity aided Bowditch's self-directed study in as much as he found himself able to use the eminent Irish chemist Richard Kirwan's library: a privateer from Salem had intercepted the ship carrying the library between Ireland and England and brought the library back to Salem in June 1791." [wiki]

When he was twenty-two, Mr.Bowditch went to sea as a ship's clerk and captain's writer. Working from the error-prone navigational books of the day was so frustrating to him that by his fifth voyage, of which he was master and part owner of the ship, he "decided to write his own book, and to 'put down in the book nothing I can't teach the crew.' On that trip, it is said that every man of the crew of 12, including the ship's cook, became competent to take and calculate lunar observations and to plot the correct position of the ship." So in 1802 The American Practical Navigator, was published. It was such an accurate and useful book that it immediately revolutionized navigation, and is still carried onboard every commissioned U.S. Naval vessel today. The first edition of Bowditch's American Practical Navigator, which became the western hemisphere shipping industry standard for the next century and a half, and in 1866, the United States Hydrographic Office purchased the copyright. Since then the book, with appropriate revisions, has been in continuous publication, and to this day it is simply known as Bowditch. 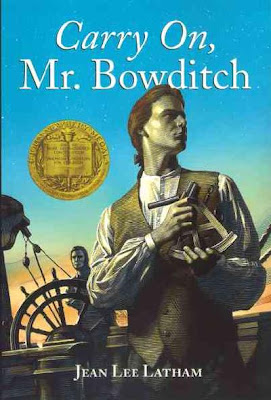 Reading about him when I was a young person, I was struck mostly by the variety and extraordinariness of his experiences, and the fascinating idea that math had such concrete applications. It had never occurred to me to think of math the way Mr. Bowditch did, as a conceptual thing and a way of looking at the world. I never thought of myself as someone who was good at math, even though later in life I became adept at pattern-making (making 3D objects from 2D patterns) and had a keen mechanical understanding of math-related concepts, based more on intuition than education, which allowed me to do well in all sorts of arenas.

Nowadays, of course, children learn the beginnings of algebra in third and fourth grade. The more conceptual elements of math begin much earlier, and along with the usual times tables school children are taught to see math as a schema, a place to play around with numbers; the basic elements of math's abstractions are set in place in more malleable brains. Add to this the basic tenets of binary and hexidecimal systems, and you get some seriously young minds working on much more abstract levels than of old. ...At least, for those minds who are actually getting an education.

Which brings me to another point: this Bowditch person was pretty much self-taught. Remember, too, that calculus as a systemic study had only been fully developed a hundred years before, so when Mr. Bowditch found an error in Newton's masterpiece only three years into his study of higher math, it showed considerable brainpower. This is something I have only come to appreciate as an adult: both in terms of Isaac Newton and in terms of understanding Bowditch's learning rate. These, and the fact that such a brilliant man should go on to become an insurance actuary, a job which he kept until his death at the age of sixty-three, strike me strongly now that I have some perspective on them.

But what strikes me particularly, and what endears me most to the man, is his deep-seated belief that every man on a ship can and should be able to navigate, despite the mores of the day which would have it that men on a ship are expendable, and only the navigator has the knowledge (and only he should have the knowledge) to find the ship on a map - to navigate. His stubbornness on this point is legendary, and his willingness to prove it comes not only from a man who taught himself to be who he was, but from a time and a place: Massachussetts, in post-Revolutionary America. Best of all, he put his belief to work in writing, too - which is why his book is still relevant today, and why we have such people as Dee Caffari out there on the seas. 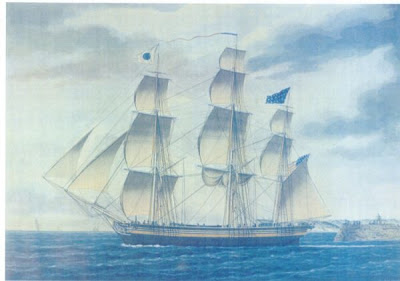 This was a good read. I really enjoyed hearing about Mr. Bowditch and his considerable accomplishments.